A growing number of public and private organisations in the UK are pledging support for the campaign for a European Day Without A Road Death. 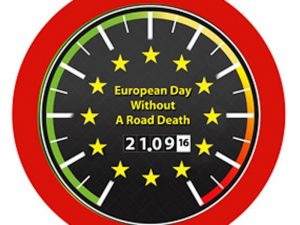 Project EDWARD seeks to raise awareness of road safety in the weeks leading up to Wednesday 21 September, the day chosen as ‘European Day Without A Road Death’ (EDWARD).

Organised by TISPOL (the European Traffic Police Network), the Project Edward campaign seeks to raise awareness of road safety in the weeks leading up to Wednesday 21 September, the day chosen as ‘European Day Without A Road Death’ (EDWARD).

The project already has the support of the European Commission, Transport Commissioner Violeta Bulc and the National Police Chiefs’ Council.

In addition, more than 80,000 people have pledged their support for Project EDWARD online via a pledge page on the TISPOL website (www.tispol.org/edward).

GEM road safety officer Neil Worth said: “A day without a road death is of course the vision we should strive for every day, not just on 21 September. But as a simple awareness-raiser, I am convinced that Project EDWARD can be a great success, whether or not we achieve zero deaths on the day itself.

“Casualty reduction must remain a priority for all national governments. There were some excellent reductions in road deaths and serious injuries earlier in this decade, but they have stalled in the past couple of years. It is therefore vital that we re-focus our attention on the efforts needed to get back on course in order to have a chance of achieving the European 2020 targets.

“We believe strongly in the value of setting targets, and we believe that the support from all industry sectors and from individuals can make a massive difference in reducing the number of people killed and seriously injured on our roads.”