Nissan has lowered the on-the-road (OTR) price of the battery-electric Leaf 40kWh range by £1,650 on all grades, placing the car in the sub-£30k P11D price bracket. 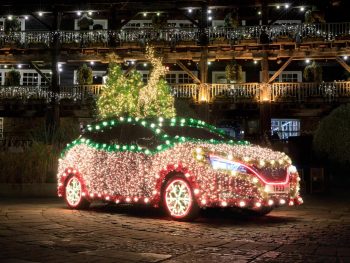 All Leaf 40kWh models have had their price reduced by £1,650. (Festive lighting not included).

Consequently, the starting price of a Leaf 40kWh Acenta is now £26,345 (including the £3,500 Plug-in Car Grant), whilst the range-topping Tekna models are available from £29,345. The Leaf range has also received minor upgrades including two rear USB connections, while Tekna receives new cornering LED fog lights as standard (an option on N-Connecta).

Combined with zero VED, off-peak electricity for charging, substantially lower maintenance costs, free ULEZ and London Congestion Charge entry, and free parking in some towns and cities, Nissan says drivers could save thousands of pounds a year in running costs compared to a petrol or diesel vehicle.

Peter McDonald, fleet director at Nissan GB, said: “We really want to help fleets in this transition to electric vehicles and appreciate they may need advice and support with this change. Our unrivalled experience in the market place means we can actively support fleets in this transition – and increasing supply to the UK and reducing the transaction cost is a key part of this.”

Increased production capacity has meant waiting times of two weeks for a Leaf.

The Leaf is made for Europe in the UK at Nissan’s Sunderland plant. Launched in 2010, the pioneering electric model is about to celebrate its tenth anniversary in 2020. With almost 440,000 sold since 2010, the model remains the world’s best-selling electric vehicle, and also in the UK where it has received more than 32,000 orders. European sales currently stand at 150,000, the company said.

Previous: MG joins Ford, Volkswagen and Nissan in latest five-star Euro NCAP results
Next: Why 2020 will be a pivotal year for fleets