By Natalie Middleton / 4 weeks ago / Latest News, Today in Fleet / No Comments

Nissan has unveiled a new £52m XL press line in its UK manufacturing plant; part of its £400m preparations for the third-generation Qashqai. 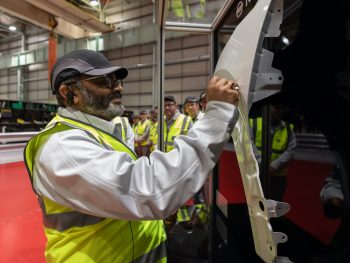 The result of an 18-month installation project, the press – which weighs more than 2,000 tonnes and can stamp more than 6.1 million vehicle panels a year – cost £52m and is part of a £400m investment by Nissan to ready the plant for the new Qashqai, supported by the Department for Business Energy and Industrial Strategy.

The £400m invested for Qashqai comes on top of the £100m invested for the launch of new Juke, and is part of an overall £1bn planned investment into the plant by Nissan over five years.

The investment is being made despite concerns over the ramifications of the possible implementation of tariffs when the transition period finishes at the end of the year. The carmaker has said its European business would be unsustainable in such a scenario.

Speaking at an official ceremony to unveil the new stamping line, chief operating officer Ashwani Gupta said: “When the first Nissan Qashqai rolled off the line in Sunderland in 2006 it created the crossover segment.

“Designed, engineered and made in the UK, and more than three million vehicles later, it remains the benchmark, just as our team in the UK continues to set the standard for productivity and quality.”