Transport Secretary Chris Grayling has confirmed the planned route for the new Lower Thames Crossing, which will cut congestion at Dartford. 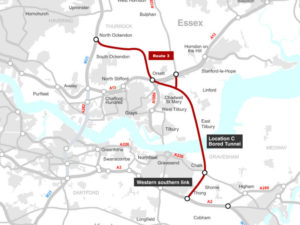 The planned route will link the A2 and the M25, congestion at the Dartford Crossing.

Following a consultation a year ago, the planned route will link the A2 and the M25 and will run from the M25 near North Ockendon, cross the A13 at Orsett before crossing under the Thames east of Tilbury and Gravesend. A new link road will then take traffic to the A2 near Shorne, close to where the route becomes the M2.

The scheme is expected to cost between £4.4 and £6.2bn and could start by the end of the decade with a five-year completion date, although a Highways England spokesperson added: “There are important decisions still to be taken about funding and the delivery model for the project.”

The Government is also investing £66m to widen the A13 Stanford-le-Hope bypass from two to three lanes along with £10m to improve traffic flow around the existing crossing and explore ways to tackle congestion. According to DfT forecasts from 2015, traffic volumes on motorways and major roads could increase by 60% by 2040.

Steve Gooding, director of the RAC Foundation, commented: “Whilst it is motorists who account for the majority of the journeys at the Dartford Crossing, the need for this link across the Thames is being driven in large part by the rapid rise in freight traffic and the expansion of the Channel ports.

“Now that this long-awaited decision has been made, drivers will be keen to know when today’s promise of shovels in the ground will actually deliver the capacity needed to ensure safe and reliable journeys.”