Kia has issued design sketches of its new Rio supermini, which makes its world debut at the Paris Motor Show next month. 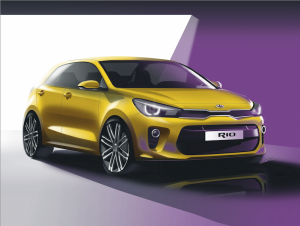 On sale from 2017, the fourth-generation model sits on an all-new platform and brings sharper styling, led by Kia’s design centres in Germany and California, in close collaboration with the company’s main design centre in Namyang, Korea. This includes the brand’s familiar ‘Tiger Nose’ grille along with a longer front overhang and bonnet, longer wheelbase, and upright C-pillar.

The new model will also offer class-leading practicality and safety technology according to the brand as well as new connectivity features – likely to include Apple CarPlay and Android Auto – and enhanced ride and handling.

The new Rio will enter production towards the end of 2016 for Europe, with production timings for the UK to be announced closer to launch.