Double the holiday traffic is expected on the roads this weekend compared to last year, driven by the weaker pound and the later timing of the bank holiday. 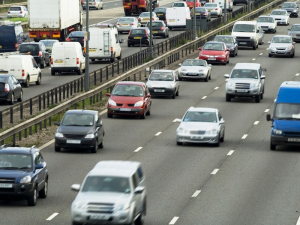 Twice the bank holiday traffic is expected on the roads compared to last year, according to the RAC

In total, the RAC estimates some 20.7 million cars will be using major roads for leisure trips between Thursday 25th and the end of the long weekend on Monday 29th August.

Saturday 27th is set to be by far the busiest day with 5 million getaways planned, up an enormous 2.5m on the same day in 2015.

A total of 4.4m leisure journeys are predicted for Sunday, double the number that was anticipated last year.

RAC Traffic Watch spokesman Rod Dennis said: “Our study of drivers’ plans for the late August bank holiday certainly suggests a bumper time on the roads as motorists make the most of the last long weekend before the end of the summer by jumping in the car to see friends of family.

“The see-saw weather patterns – warm, dry and sunny one day, cool, wet and windy the next – look set to continue but any doubts about the weather clearly are not playing on motorists’ minds with so many of us planning a late August break.”