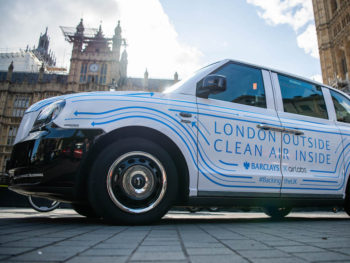 The fleet of Barclays Air Cabs is now live

Ten LEVC range-extended electric cabs are now available to hire in London, all fitted with air filtration technology from tech start-up Airlabs that, as per the firm’s research, means users will be able to breathe air that’s as clean as that found at Peak District National Park.

The Airlabs devices feature patented nano carbon filtration technology that works to remove up to 97% of particulate matter (PM2.5) and up to 95% of nitrogen dioxide (NO2) from the air inside the cab in 10 minutes.

The ‘Barclays Air cabs’ cabs are being run as part of a new partnership between Barclays and Airlabs and will be available for hire on London’s roads for 12 weeks this summer.

The World Health Organisation guideline safety limit for annual Nitrogen Dioxide (NO2) exposure is 40 µg/m3. When tested in the Barclays Air cabs, pre-filtered air peaked at 111 µg/m3 NO2 inside the cab.

After minutes of using the air cleaning device, the air inside the cab dropped to as low as 5.7 µg/m3 NO2 – as clean as the air in the Peak District National Park, which averages 7 µg/m3 NO2.

Matthew Johnson, chief science officer and co-founder of Airlabs, said: “We’ve witnessed worryingly high levels of toxic pollution in cities across the UK in recent years, and the concern is only growing for those living and working in pollution hot spots – with London being one of the worst. An ever-increasing number of people are exposed to unhealthy pollution levels.”