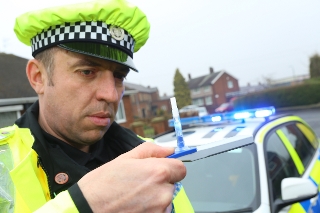 The campaign runs throughout the month of June, with the Lead on Roads Policing warning motorists that police will be on heightened alert to spot anyone driving under the influence of drink or drugs.

Commenting on the use of the new drug testing kits – introduced following the March implementation of new drug driving laws, Chief Constable Suzette Davenport said: “We are better equipped than ever to detect and penalise those who take this very dangerous risk and, using intelligence received from the public and on likely areas for offending to occur, we will be ready for action to keep the road network safe, whether it be at night or the morning after.

“We are also particularly interested in getting our message out to younger drivers, who may be tempted to think that they remain able to stay in control. Our evidence shows they are more likely to take unnecessary risks.

“Every year, forces around the country deal with families who have lost loved ones because of the recklessness of drivers under the influence and I regard it as a major priority for us to ensure that the numbers of those families left to grieve is reduced year on year.”

Road safety charity Brake has greeted the campaign but is continuing its push for a zero-tolerance drink drive limit of 20mg per 100ml of blood through its not a drop, not a drag campaign.

Julie Townsend, deputy chief executive, Brake, said: “We believe drink driving is becoming more and more socially unacceptable in the UK, further aided by the lowering of the drink drive limit in Scotland at the end of last year. The new drug drive law introduced in March was also an important step in catching risky impaired drivers. However, there is a long way to go to stamp out this menace completely, as a selfish minority continue to get behind the wheel after drinking alcohol or taking drugs. We urge all drivers to ensure they are not part of that minority; instead we can all be part of the solution by making sure we can get home safely from summer festivities, and looking out for friends and family and ensuring they stay sober behind the wheel.

“Even one small drink or small amounts of drugs make you a danger on the road, so the only safe policy is not to drink or take drugs at all if you’re driving – not a drop, not a drag. Feeling fine does not mean you’re safe to drive. That’s why Brake continues to campaign for a zero-tolerance drink drive limit, and greater priority to be given to roads policing, to make clear drink and drug driving won’t be tolerated.”