Mobile phone detecting technology that can be used to monitor drivers who illegally use phones while behind the wheel is being rolled out by the Australian Government of New South Wales. 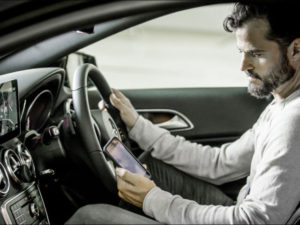 The Government will be the first in the world to deploy the technology in a bid to improve road safety and reduce the number of people killed or seriously injured.

The move has been praised by the RAC, with ‘RAC Be Phone Smart‘ campaign spokesman Rod Dennis stating: “One of the real challenges in clamping down on this dangerous behaviour is making drivers believe they will be caught – and given the increasing prevalence of mobile phones, it is very much a global problem.”

Existing mobile camera units are being used by more than a third of UK police forces to prosecute drivers not wearing seatbelts or using a handheld mobile phone, while the number of drivers caught on their mobile phone fell 39% in 2017 following the 1 March introduction of tougher penalties. However, one in five drivers are still using their mobile when at the wheel, according to recent research by SmartWitness. Furthermore, a half of drivers claimed mobile phone distraction when behind wheel according to a survey carried out by used car supermarket, The Car People.

Dennis continued that the technology could be a game-changer in the UK: “Motorists need to believe that using a handheld phone brings real consequences – and move on from thinking that it is just a minor momentary indiscretion that will go unpunished.

“We very much support police forces’ regular enforcement campaigns that help send a message to offending drivers that the law is not on their side. At the same time we know that forces up and down the country are under pressure, and with the best will in the world will never be able to catch every motorist.

“So new technology, such as that proposed by the New South Wales Government, could be a game-changer in the UK. If proven to be accurate in detecting illegal use, it could really help shift behaviour and, in turn, save lives. We would encourage enforcement agencies here to look into what role it could play.”