Half of drivers claim mobile phone distraction behind wheel

Drivers are still using their mobiles behind the wheel, causing crashes, near misses and road rage, according to new research. 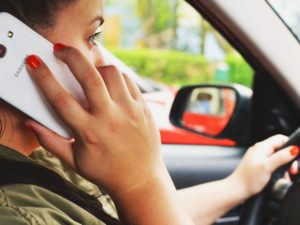 Drivers aged 25-35 are the worst offenders with 77% admitting to being distracted by their phone and 74% saying it has resulted in them driving dangerously.

The survey, carried out by used car supermarket, The Car People, asked 1,500 British drivers exactly what distracts them when behind the wheel and how it impacts on their driving.

A total of 49% of respondents said their mobile phone has distracted them while they drive, including receiving a call (31%), receiving a new message notification (21%) and using their phone for directions (20%).

The research also revealed that when it comes to mobile phones, it is now drivers aged 25-34 that are the most distracted, with more than three-quarters (77%) admitting it is a factor, compared to 66% of 18-24-year olds.

As a result of being distracted by their mobile phone, 8% of 25-34-year olds said they had crashed their car, 15% had experienced a near-miss, 10% had gone through a red light and 22% had been beeped at.

Commenting on the results, Ryan Robbins, senior human factors researcher at TRL, who conducted the driving simulation, said: “Most of us drastically overestimate how well we can drive, even when we are concentrating fully, and the evidence is clear that when we are distracted our driving is considerably worse.”