The Mitsubishi ASX has received its latest facelift, bringing a new petrol engine and trims as well as the reintroduction of automatic transmission and four-wheel drive. 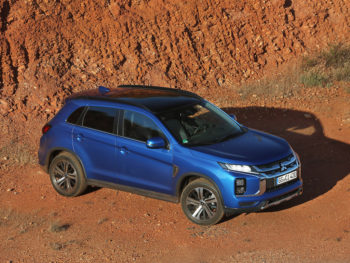 First launched in 2010, the compact SUV gets an updated exterior design, including a new front-end and revised lights and bumpers, along with minor interior changes such as higher-grade materials.

Engine line-up sees the previous 115hp 1.6-litre petrol introduced under the last facelift – the sole unit after diesel was axed – upgraded to a 150hp 2.0-litre petrol power unit that, married up with a five-speed manual and front-wheel drive, offers 27% more torque (195Nm vs 154Nm) and improved performance. The 0-62mph time is reduced from 12.2 seconds to 10.2 seconds while top speed is up to 118mph from 114mph. Fuel and CO2 figures are still to be released.

Mitsubishi has also reintroduced a four-wheel drive version, which is equipped with a CVT automatic transmission as standard, and accelerates from 0-62mph in 12.2 seconds. The CVT gearbox also incorporates a Sport mode, similar in concept to the system fitted in its Eclipse Cross sibling, which employs a ‘step-up’ shifting control system to bring it in line with the driving experience of a more traditional automatic transmission, and features paddle shifters.

The 2020 Mitsubishi ASX goes on sale in the UK in September 2019 with pricing to be announced closer to the launch date.