Mitie has deployed its first zero-emission large van, taking its fleet past the landmark of 1,000 electric vehicles. 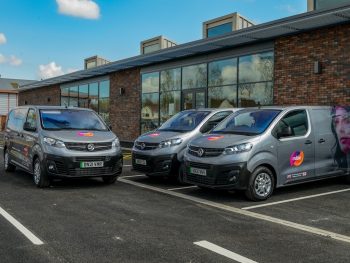 Continuing Mitie’s meteoric uptake of electric vehicles, the newly implemented Vauxhall Vivaro-e van is the first of 655 Vivaro-e vans on order for delivery this year, as Mitie pushes ahead with its commitment to have 2,021 EVs by the end of 2021, as announced in February.

The new van joins Mitie’s existing pure electric fleet of cars, vans and other commercial vehicles – the facilities management and professional services company is believed to have the largest electric fleet in the UK. Recently introduced vehicles also include its zero-emission gritter, named ‘Gritter Thunberg’.

The addition of the Vivaro-e electric large van is especially significant as Mitie had initially focused on deploying electric cars and small vans when it first started to shift to EVs in mid-2019; at the time, there was no viable alternative for its large diesel vans with an adequate range to manage the heavy load often carried by mobile engineering teams.

The Vivaro-e will be used by a Mitie frontline engineer and has been specially fitted-out to ensure it can carry all the equipment needed while minimising weight, to help maximise the battery’s range.

The vehicle is one of the first to be delivered to a former Interserve Facilities Management colleague following Mitie’s acquisition of the business in November 2020. The acquisition led to Mitie’s overall fleet growing by over 2,000 vehicles, meaning the business anticipates having approximately 7,200 EVs by 2025.

Simon King, director of sustainability and social value, Mitie, said: “When we began our EV journey 18 months ago we thought switching our big vans would be one of our biggest challenges. However, with Vauxhall helping us overcome this hurdle, we’re very pleased to be passing the milestone of 1,000 zero-emission vehicles with the delivery of this Vivaro-e.

“With over 600 more set to join our fleet this year, we’re making great progress towards our target of 2,021 EVs in 2021 and helping even more Mitie fleet drivers switch to electric.”