The Government has been accused of ignoring safety concerns over all lane running as it says such schemes are “as safe as a standard motorway”. 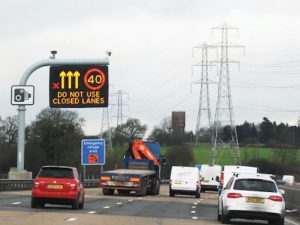 Earlier this year, the Transport Committee released a report saying that Government should not proceed with permanently removing the hard shoulder for all lane running schemes while major safety concerns exist. Ministers have now issued a response defending the safety of such schemes.

While the Committee argued that the permanent conversion of the hard shoulder into a running lane is a radical change to the nature of motorways and creates a real challenge for motorists, the DfT has responded saying: “The Government does not agree with the Committee’s recommendation to revert to earlier smart motorway designs.

“The safety objective of all types of smart motorway has been to maintain the high safety performance levels on motorways. All Lane Running is demonstrably as safe as a standard motorway and the M25 schemes show that casualty and collision rates are down. All Lane Running provides a simpler environment than part-time Hard Shoulder Running and avoids any potential uncertainty caused by the operation of a part-time hard shoulder leading to misuse.”

In response, Louise Ellman, chair of the Transport Committee, commented: “The Department for Transport is blatantly ignoring the safety concerns set out in our report. We had barely received the response to our report before the Government endorsed an all lane running scheme on the M4.

“The Committee isn’t arguing with the Government about the need for more capacity on our motorways, or their statement that motorways are our safest roads. We support smart motorways such as the M42 scheme.

“But we take real issue with the Government’s assertion that all lane running schemes on motorways are no different to other types of roads without hard shoulders. Motorways are a different class of road and drivers have different expectations when using them.”

Ministers did acknowledge that the public needs to learn about variable speed limits and compliance with Red X signals on these motorways and said there would be a further education campaign in 2017 while “Highways England will continue to monitor and report Red X non-compliance and develop further interventions to tackle it.”

The Transport Select Committee responded: “Even then, we believe that education will fail without enforcement and ministers need to ensure that failure to comply is backed up with effective enforcement.”

The Government also responded to concerns over the size and spacing of Emergency Refuge Areas (ERAs) as outlined by MPs as well as organisations including the AA and RAC, and announced that Highways England has committed to review ERA spacing as part of a broader approach to reduce the frequency and risk associated with live lane stops.

Ms Ellman responded: “While we are pleased that Highways England has committed to a review, the M4 proposal should not have gone ahead until the review is complete.

“We are not the only people who are worried about this incarnation of All lane running schemes. In the course of our inquiry, there were genuine concerns raised by the emergency services, road workers and recovery operators. The Government cannot ignore them.”

The RAC also raised concerns over the Government’s response. Chief engineer David Bizley said: “The flat refusal of the Government to listen to genuine voices of concern from those who work on motorways every day and the considered conclusion of the Transport Select Committee is very worrying. The safety case for all lane running is not yet proven and as a result we fear that it won’t be long before there is a major tragedy that will make the Government think again.

“We also believe the Government is misguided to compare the removal of the hard shoulder to that of an A-road. Motorways are the safest roads on the network, and the hard shoulder and emergency refuge play an important part in this.

“We desperately need increased capacity on our busiest sections of motorway to ease congestion and improve journey times for all, but safety must not be comprised in the process. Smart motorways are clearly part of the solution, but we have always said dynamic hard shoulder schemes, where hard shoulder is only used as a running lane at busy times, provide the best compromise between increased capacity and keeping drivers, their passengers and roadside workers safe.

“The all lane running configuration is, however, being rolled out by the Government as the scheme of choice and we therefore need to focus on making that as safe as possible by increasing the frequency of emergency refuge areas (ERAs).”