Drivers are being warned of two weekend closures for parts of the M56 this month as part of a five-week project of upgrades. 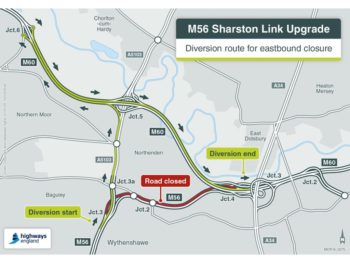 The diversion route for the weekend closures

The work by Highways England will start on Wednesday 9 January and bring improvements to a two-mile stretch of the M56, known as the Sharston Link, between junction 3 of the M60 at Cheadle and junction 3a of the M56 at Wythenshawe.

The project includes resurfacing the entire route, repairing sections of the carriageway, replacing road markings, and installing new reflective road studs and traffic sensors. Repair work will also be carried out on a bridge which carries the motorway over a railway line.

Most of the work will take place overnight to keep disruption to the minimum, with diversions in place when sections of the motorway need to be closed, but two weekend closures will also be needed to carry out structural repairs to the motorway. Closures have been scheduled for weekends when there are no home matches for Manchester United or Manchester City.

The first weekend closure will take place on the eastbound carriageway between 9pm on Friday 11 January and 5am on Monday 14 January. A second closure is being planned on the westbound carriageway during the last weekend in January but this will be postponed if next week’s FA Cup draw results in a home match being played by Manchester City or Manchester United during that weekend.

Rob Williams, project manager at Highways England, said: “We’ve chosen two of the quietest weekends of the year to carry out the work but are still advising drivers to allow extra time for their journeys, especially if they’re heading to Manchester Airport for a winter getaway.”