Highways England is reminding drivers that the M4 will be closed in both directions between junction 6 (for Slough) and junction 8/9 (for High Wycombe) this weekend as part of smart motorway work. 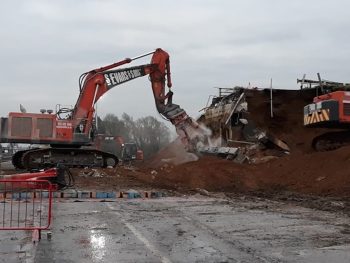 The original Marsh Lane bridge was demolished in November last year. The demolition will be featured on Scrap Kings (Quest TV) on Tuesday 28 April at 9pm

During the closure, huge steel beams for the new Marsh Lane bridge will be lifted into place; as a result, this section will be closed from 8pm on Friday 24 April until 6am on Monday 27 April 2020.

The original bridge over the motorway was demolished in November last year – as part of the project to convert the M4 between junctions 3 and 12 to a smart motorway – and will be featured on the TV programme Scrap Kings, which will be shown on Quest next Tuesday 28 April at 9pm.

Motorway traffic will be diverted via the A308M, A308 and the A355 and there will be fully signed diversions in place.

Delays are expected though – despite the reduction in traffic during the lockdown – and anyone making an essential journey who will be affected by the closure is being urged to leave extra time for their journeys and consider alternative routes if possible.

There is another full weekend closure of the motorway planned for the first weekend of May between junctions 5 (at Langley) and 6 (for Slough). The closure, from 8pm on Friday 1 May to 6am Monday 4 May, is to lift steel beams into place for the deck of the new Recreation Ground bridge.