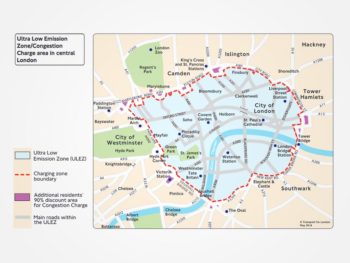 The Ultra-Low Emission Zone covers central London initially, before expanding to include areas bounded by the North and South Circulars in 2021

The new zone aims to cut local emissions in London by penalising older and more polluting vehicles – cars and vans that do not meet Euro 4 for petrol, Euro 6 for diesel, Motorbikes that don’t meet Euro 3, while buses, lorries and coaches must by Euro 6 or pay £100 per day – and is based on a vehicle’s Euro emission standard rating. The £12.50 per day charge sits on top of the Congestion Charge, although a notable difference is that it runs 24/7 as opposed to the Congestion Charge that operates between 7am-6pm. Drivers that don’t pay will receive a fine of £160.

The scheme will affect around 40,000 vehicles from today and aims to reduce toxic emissions by around 45% within two years. Mayor of London Sadiq Khan said it was “important we make progress” in tackling the capital’s toxic air.

Poppy Welch, Head of Go Ultra Low, the joint government and industry campaign to promote the uptake of electric vehicles, said: “For businesses regularly driving in London, the introduction of the Ultra Low Emission Zone means there has never been a better time to consider incorporating electric vehicles into fleets. Offering exemptions from both the Ultra Low Emission and Congestion Charge zones, cheaper running, maintenance and tax costs, as well as a government grant towards the purchase price of qualifying zero emission vehicles, they can offer considerable whole life cost savings. With a number of other cities, including Leeds and Birmingham, set to introduce clean air zones over the coming years, now could be the perfect time to invest in a lower emission, and lower cost, electric vehicle fleet.”

However, the BVRLA and FTA do not believe enough is being done for businesses to cope with the ULEZ.

“Businesses across London are upgrading their fleets to comply with the new ULEZ, but it is clear that many smaller firms are still unaware of the zone or are struggling to afford the switch to expensive new low emission vans and trucks,” said BVRLA Chief Executive, Gerry Keaney. However, he added that, “in many cases, [small businesses] will be able to manage their costs better by leasing or hiring a compliant car, van or truck.”

Natalie Chapman, head of urban policy at FTA, added that the zone is not the most effective way to improve air quality in the long-term and will impact on the livelihoods of many small businesses in London unless changes are made: “FTA recognises and supports the need to improve air quality, but we question the effectiveness of the ULEZ in reducing emissions and the lack of financial support available to businesses.

“The ULEZ is not a transformative measure, as marketed by Sadiq Khan: it simply brings forward the fleet replacement cycle at huge cost to many small businesses and operators of specialist vehicles.”

In December 2018, the Mayor announced a measure to help micro-businesses in London – those with fewer than 10 staff – prepare for the financial cost of updating their vans to those compliant with ULEZ standards. However, this measure does not support companies operating HGVs in the capital.

Others have welcomed the ULEZ, with the policy said to be key in pushing the sale and use of electric vehicles, considerably reducing local emissions. Commenting, Daniel Brown policy manager at the Renewable Energy Association said: “This sends a clear message to the UK and global car manufacturers that electric vehicles need to be built in volume, particularly as other cities follow suit. The EV charging industry will be busy for the next two years deploying charging infrastructure ahead of October 2021 when the London ULEZ tightens, becoming available only to zero emission vehicles.”

The new emissions zone is an additional charge on top of the Congestion Charge Zone and Low Emissions Zone already operating within London’s limits. Critics have said that the zone’s operation has been poorly campaigned, with a survey by Nissan finding that 1 in 3 people were unaware of the ULEZ going live today, 8 April 2019.

The results were backed up by Hitachi Capital, that found only 54% of its survey respondents know what a Clean Air Zone is, with awareness on a national level at just 43%.

The introduction of London’s ULEZ is a forerunner before towns and cities around the country follow suit. Scott Chesworth, operations director at RAM Tracking, said: “Fleet managers could face a situation where some vehicles can travel in the ULEZ and others can’t. Unless navigating the Capital’s centre is absolutely necessary, investing in telematics software will help fleet managers to be more savvy about route planning and rostering.”

London’s ULEZ is set to be expanded to cover the entire area between the North and South Circular roads in 2021, while a Zero-Emissions Zone could come into effect from 2025. Last month, Greater Manchester revealed proposals to implement a charging Clean Air Zone (CAZ) spanning all 10 local authorities in the region by 2021 and Birmingham also approved plans for a CAZ on 12 March.

The BVRLA has produced a five-point check-list for fleets faced with ULEZ uncertainty.