Lexus will expand its SUV offering next year with a small SUV called the UX. 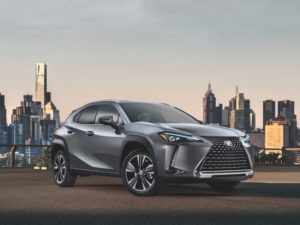 A fourth generation self-charging hybrid system will feature in the UX 250h.

Aimed at replacing the slow-selling CT hatchback, the UX is the first to be built on the new GA-C global architecture platform, developed for high structural rigidity and a low centre of gravity, bringing excellent ride quality and stability.

The UX will be offered in petrol and petrol/electric hybrid guises – new powertrains include a 167bhp 2.0-litre petrol combined with a new direct shift continuously variable transmission (Direct Shift-CVT) in the UX 200, while the UX 250h uses that same engine allied to an electric motor. Thanks to the electric motor driving the rear wheels, the 250h model offers all-wheel drive capability.

The UX will also introduce Predictive Efficient Drive, a Lexus-first system that analyses driving habits and the expected road and traffic conditions to optimise charging and discharging of the hybrid battery. The more the UX 250h is driven, the more data is gathered to help optimise fuel consumption.

The system features Predictive Deceleration Support technology which uses accumulated knowledge about a driver’s behaviour to predict when and where the vehicle is likely to slow down or stop. For example, when the UX approaches a location where the driver has slowed or stopped in the past, and the driver releases the accelerator pedal, Predictive Deceleration Support increases regenerative braking, allowing more efficient energy recovery and recharging of the hybrid battery. The system can provide deceleration support up to about 1,000 feet ahead of the vehicle.

Predictive State of Charge (SOC) control for the hybrid battery uses guidance from the navigation system to predict the route for a distance of up to about six miles ahead.

As is the case with other Lexus models, a range-topping F Sport model will also be offered, featuring revised styling for a more sporty appearance, bigger wheels, retuned suspension and uprated interior trim.