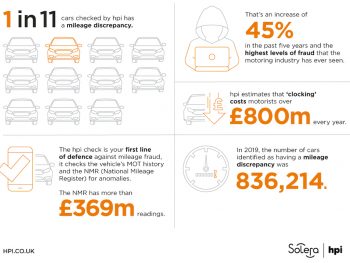 The data shows the number of vehicles with mileage discrepancies has increased, bringing safety implications

Over the past five years, the number of vehicles with mileage discrepancies has increased by 45%. The ratio has grown steadily over the years, recorded as one in 14 in 2018, one in 16 in 2017, 2016 and 2015 and one in 20 vehicles in 2014. HPI data also shows that there is a one in three chance of uncovering another hidden problem with the car such as any outstanding finance, previously written off or recorded stolen.

Fernando Garcia, consumer director at Cap HPI, said: “These false readings often correlate to mechanical issues and faults later down the line, which could have safety implications or lead to hefty repair bills.  All the safety features and modules in a modern car, such as airbags, ABS and ignition, feed information into the vehicle’s central computer system. Each time an issue arises, such as a fault warning, a ‘snapshot’ of the vehicle’s mileage will be logged.

“Unless a vehicle’s mileage is wound back by a particularly diligent clocker who knows to alter the mileage readings on all modules as well as the odometer, these will be out of sync. This will lead to issues with safety warnings – making it potentially very dangerous for the driver, passenger and other road users.”