Drivers are still getting away with ‘lane hogging’ despite the introduction of new penalties to tackle the issue four years ago. 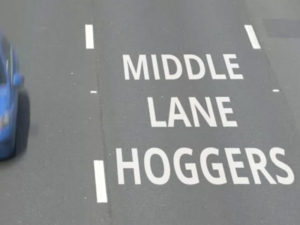 Freedom of Information data obtained by Confused.com show that only 2,012 drivers were convicted of ‘careless driving’ in 2016 – which not only includes middle-lane hogging but also tailgating, undertaking and driving too slowly.

Intended to help the police with tackling problem motorists, the measures introduced in August 2013 mean officers can issue £100 fines and three points for drivers caught for such offences rather than taking them to court.

Yet, two-fifths (37%) of drivers are unaware that there are penalties for middle-lane hogging and 32% admit to hogging the middle lane according to the driver savings site.

And one in five (19%) drivers have had an accident or near miss as a result of being tailgated by another driver, and a further one in 10 (11%) from a middle-lane hogger.

With learners to be allowed to take motorway driving lessons with an approved instructor from 2018, many drivers hope that the move will bring about improvements. In fact, one in two (50%) think that middle-lane hogging should be focused on, and almost two in three (65%) believe that tailgating should be a priority.

Previous: Chance to win £50 for giving feedback on EST work
Next: Today in Fleet – Thursday 21 December