Kwik Fit is enhancing its ‘Mobile7’ operation and rolling it out into new areas to bring fleets added flexibility with tyre replacement. 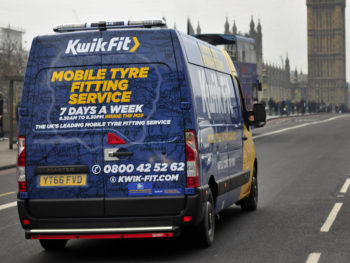 Launched at the end of 2016 within the M25 and later expanded, the service enables tyres to be fitted at a location of the customer’s choosing, whether that be the company car park, at home or another location.

The service is run via a 200-strong nationwide mobile fleet and over the last 12 months has expanded into eight further areas including around Birmingham and the West Midlands, and Southampton/Portsmouth/Winchester.

During the second half of 2019 and into 2020, ‘Mobile7’ will be rolled out into a number of other major conurbations across the UK while Kwik Fit is also developing a new IT platform infrastructure that will deliver a range of enhancements to ‘Mobile7’ in the coming months, resulting in an even faster and more efficient service to customers.

Mobile7 services – which complement the company’s national network of 600-plus centres – are also being expanded to offer a seven-day operation with longer hours in more regions, providing more time slots on a daily basis.

Simon Lucas, Kwik Fit’s customer support director, who has overseen the launch and expansion of ‘Mobile7’, said: “Our mobile solution has always been a vital service to both fleet and retail customers and the advent and roll-out of ‘Mobile7’ makes it more attractive than ever.

“Currently ‘Mobile7’ designated vans serve an average of 10 customers per day. Whether company car and van drivers require our mobile fitting service during the day, evenings or weekends, Kwik Fit is able to offer greater convenience through ‘Mobile7’. We have seen significant take-up, particularly for tyres to be fitted during evenings and on Sundays with approximately 35% of bookings for those time slots.”

Previous: New hedgehog road sign to help improve road safety
Next: Mayor of London drives plans for all new cars and vans to be electric by 2030