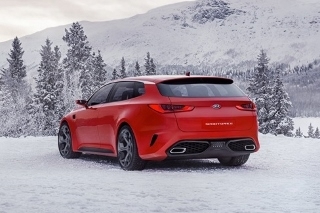 The second-generation Optima launches in Q4 of this year with a similar range to its predecessor – comprising a 1.7-litre diesel engine and saloon bodystyle. In mid-2016 Kia will add a plug-in hybrid drivetrain and an estate version, previewed by the Sportspace concept car shown earlier this year, as well as a 245bhp GT model, aiming to align it more closely with European tastes.

President and CEO of Kia Motors UK, Paul Philpott said: “The biggest constraint [for the outgoing car] was only having a sedan. In Europe, the segment is three-quarters wagon, in the UK it’s about 45% wagon. Having two bodystyles and broadening our engine range, and having a high-performance GT version, all adds to the opportunity with Optima.

“With the new 1.7 sedan which goes on sale in January, we’re looking to maintain our sales at about 1,000 a year as an annual sales pace. Once we get the broader range of offering, wagon, GT and then the alternative powertrains as well we’re looking to increase our annual sales to 4,000 units.”

Specification is also focused on user-choosers, with full-screen navigation included as standard across the range, while a dual-clutch transmission at 116g/km is 40g/km lower than the outgoing automatic version.

The Optima forms part of a three-model refresh in the next six months, including a refreshed Cee’d that introduces new drivetrains and a GT Line trim, and an all-new Sportage crossover. The latter replaces a car which accounts for 27% of the brand’s UK sales, and is likely to offer CO2 emissions of under 120g/km – something Philpott believes will re-open opportunities in the fleet sector.

“Sportage is a bit of a phenomenon for us, we launched it in 2010 and in its last year this we’ll hit a new record volume of 22k. We’re looking to grow further, we think the new product is worthy of a bigger portion of the market, the SUV segment is still growing and our biggest rival the Nissan Qashqai is selling 40,000 cars. Therefore 22,000 shouldn’t be a limit for Sportage. There’s lots of opportunity for growth with Sportage.”