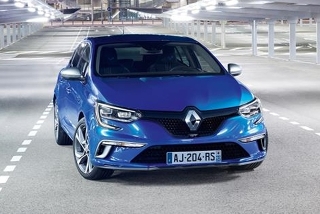 Deliveries will begin next summer, and Renault UK managing director, Ken Ramirez, says 2016 will be big for the brand, with the first full year of Kadjar sales and an all-new Megane refreshing its C-segment offering. New Scenic and Grand Scenic models will follow.

But the UK will continue to get a condensed model range, despite new launches elsewhere. There are no plans to offer the Talisman, which is replacing the Laguna elsewhere in Europe, or to offer the new Espace to British buyers. Ramirez said the company has focused hard on residual values since 2012 – the range-wide average is now 35-36% instead of 27% three years ago – and that these could damage that.

Instead, the Megane will position itself to attract downsizers with its tablet-style touchscreen, significantly increased interior space and sharper design, while also offering CO2 emissions from 86g/km, up to 86mpg and a targeted rise in residual values. A mild hybrid is due in 2017 which will take the car over 90mpg, Ramirez said.

The focus in the UK will increasingly shift towards a three-strong crossover family. Captur already commands 20% of its segment – the fastest growing in the UK – while the Kadjar will launch into the second-fastest, offering an alternative to C and D-segment models. A D-segment crossover, replacing the Koleos elsewhere in Europe and likely to be based on the Nissan X-Trail, is also planned for the UK, instead of catering for that size of car with the Talisman.

“There are three vehicles that are adding exactly where the growth is where an MPV is decreasing significantly, particularly that size. From a fleet perspective, our number one selling vehicle will be Clio in volume but our crossover presence will be significantly and increasingly important.”