Hyundai has provided further details on its Prophecy concept, which gives an insight into the brand’s future EVs. 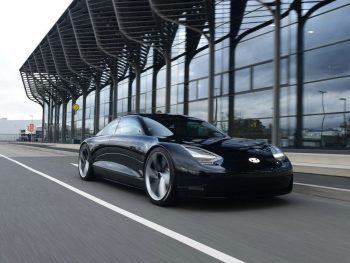 Due for its unveiling at the cancelled Geneva Motor Show, the Prophecy has been revealed digitally since and marks a big departure from last year’s 45 concept that debuted at Frankfurt.

As signalled by the name, it teases ideas and features of future models, such as the pixel headlights.

It’s built on Hyundai’s dedicated Electric Global Modular Platform or ‘E-GMP’ EV platform, enabling more space for the cabin; the Prophecy puts focus on reimagined in-car experiences, including being used as an ‘entertainment space’ when not being driven.

The carmaker says as autonomous driving technology progresses, the potential for vehicles to be used as relaxation spaces will grow in importance. While in ‘Relax Mode’, the Prophecy gets a large screen across the front of the cabin and reclining seats. The dashboard also swivels out of the way.

Even when being driven, the Prophecy aims for a more comfortable approach; rather than a steering wheel, it has twin joysticks, which can be used to also control 90% of in-car functions, and a new Smart Posture Care System (SPCS) that allows drivers to enjoy an optimised seating position based on their individual physical characteristics.

Rather than winding down windows, drivers can use an air filtration system with a fine dust sensor built in to the vehicle. This activates automatically, even when idle or charging, to filter the air for purity, and even pumps it out if the interior air is fresh enough.