By Alex Grant / 3 years ago / Interview, Top Stories / No Comments 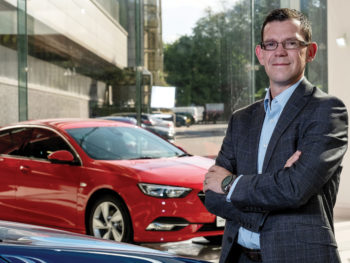 What a difference a year makes. August marked the first anniversary of Vauxhall, and sister brand Opel, joining the PSA Group. Changes have been rapid, and are ongoing; a group-wide re-shuffling of resources, new products on shared platforms, and re-contracting of the two brands’ dealer networks among them, all seeking to lay the foundations for a profitable future.

Early signs are positive. Having come close to profit in the first half of 2016, only to be hurt by shifting post-referendum exchange rates, Vauxhall/Opel was €502m (£453m) back in the black in the first half of 2018 – for the first time in almost two decades. PSA has its sights on 20 new markets, including China and North America, by 2022, with a new model due every year until 2024, and a goal of cutting R&D costs by €700 per vehicle by that point as a result of group-wide synergies.

But, for Vauxhall’s fleet sales director, James Taylor, it’s business as usual. “From a customer basis, the Vauxhall fleet operation is separate to the [Peugeot, Citroën and DS] fleet operation,” he says. “We can work together if it’s the best solution for the customer, but for the vast majority of situations it’s business as normal and the organisations are very separate.”

Instead, the changes are behind the scenes. Vauxhall has a new managing director, and recently undertook a consultation to relocate its headquarters from Griffin House, built as its design centre in 1964, to other sites in and around Luton. For fleets, the field-based sales team means there should be no sign of the move.

Some strategic moves are visible. Last year’s SMMT data reflected a steep drop in passenger car registrations, down 55,818 units (22.2%) on 2016, to 195,137 units. Fleet, at 54% of that volume, recorded a near-identical reduction (-31,353 units, -22.9%), though almost entirely due to restricted short-cycle volumes. Van registrations declined by around a quarter.

“There’s been a sea change in our approach to the marketplace,” Taylor explains. “This year rental will be the lowest volume we’ve done in our memories here, stretching back 20 years. The big focus is on driving profitability, and improving residuals. Last year we reduced [Corsa] rental volumes by about 60%, and we’ve seen our short-cycle residuals improve over £1,000 from trough to peak, with a knock-on for long cycle residuals. As this happens with other car lines, we’ll expect a similar uptick.

“In terms of our market share, I think we’re really looking at steady but small growth, and a lot will be product driven. A lot of the development cost we were incurring as a European organisation, as we didn’t export many [Opel and Vauxhall] products around the rest of the world for GM, suddenly that’s shared within a much bigger group. That allows us to be more competitive.”

Which should start to reflect in this year’s results. Despite a weaker UK market and the challenges of re-testing for WLTP, Taylor says Vauxhall’s range was compliant early with no disruption to orders. Core models are growing their ‘true fleet’ share, and the focus now is the newcomers.

“Over the second half of the year we’ve got to capitalise on the SUV opportunity. When you get new nameplates and sectors, such as with Grandland X, it takes a bit of time getting the product to market and in front of customers. We’ve done around 1,500 test drives now, so product awareness is building, and our order take is growing exponentially month on month,” he says.

The end goal is to match the brand’s ambitions for around 35-40% of its sales to be SUVs, and Taylor sees that weighted fairly equally across its three products. The Mokka X (already Vauxhall’s second biggest-seller) was repositioned earlier this year, aimed at the supermini-derived segment despite being larger than the norms. In fleet, the Grandland X opportunity expands with the new 108g/km 1.5-litre diesel, targeting lowest-in-class Benefit-in-Kind, and the plug-in hybrid due next year.

Being part of a group also presents opportunities to share best practise. Vauxhall will launch something similar to Peugeot and Citroën’s business centres by the end of the year, offering standards such as extended opening hours and transport provision for operators. This is expected to comprise between 50 and 75 specialist dealers.

“We would be foolish if we didn’t look what [Peugeot and Citroën] are doing,” says Taylor. “We are not hamstrung, in that it has to be a carbon copy, they are different between Citroën and Peugeot, so we will come up with what we think is the best solution for our network and customers.”

In turn, this readies the brand for the ‘Year of the Van’ in 2019, alongside launching the new Combo and Luton-built Vivaro, both on PSA platforms. Now responsible for vans and cars, Taylor is recruiting specialists to focus on conversions and finding new business, particularly with regional rental suppliers which have both three-year cycles, and the ability to take new products to potential customers.

Given the complexities of decision-making, it’s a vital process: “We’ve seen around 5-10% of corporate fleets moving from diesel to petrol. If you compare an Astra Turbo [petrol] to the diesel, it’s effectively got the same CO2, so from a whole-life cost proposition it can be an either/or choice. Even on Insignia there’s a bit of movement back towards petrol. But in terms of traditional policies, most are diesel only. They are adding hybrids where required, but there hasn’t been much movement yet.”

Of course, PSA technology lines Vauxhall up for electrification, with the Grandland X PHEV and Corsa EV set to be two of four plug-ins due by the end of 2020. But there’s significant, untapped, demand elsewhere, Taylor says: “Ironically, there may be more interest on the CV side than the car side. We face a lot of companies being challenged internally about their strategy for reducing carbon emissions, and for the low-emission zones in major cities. There are offerings, but you’re compromised on payload. It will be interesting to see how that technology develops.”

As a household name in fleet, it’ll be interesting for the industry to watch how Vauxhall develops. But the mood is as positive as recent results: “We’ve made significant strides on the cost side in terms of driving it out of the business, on a group basis. I’m optimistic that we’ll have a good performance against expectations as a group for this year.”

By 2024 the entire Vauxhall car and van range will use one of two PSA platforms, each comprising a shared floor assembly, chassis, powertrain and electronics. The Group says this saves 20-50% on development costs compared to the nine platforms currently in use, while reducing the number of engine ‘families’ from 10 to four. A prior partnership means the Crossland X and Grandland X are already on PSA platforms, with the Corsa, Combo and Vivaro due to follow within a year.

With no plans to import the GM-developed Ampera-e EV into the UK, Vauxhall will re-introduce plug-ins into its range in 2020. By the end of the year, it will have an electric version of the new Corsa, a plug-in hybrid Grandland X, and two others – which could be commercial vehicles. Plug-in hybrid and electric drivetrains will be available range-wide by 2024, and PSA says Vauxhall/Opel’s experience with hydrogen fuel cell development will also be used by the group.

PSA is already bringing Vauxhall’s vans in-house. The new Combo is derived from the latest Citroën Berlingo and Peugeot Partner, instead of the Fiat Doblo, while the Luton-built Vivaro will be replaced next year, ending a partnership with Renault, and is likely to be based on the Dispatch/Expert. PSA will continue to share the Movano with Renault, though Peugeot and Citroën’s largest vans are based on the Fiat Ducato. Opel’s Russelsheim site will lead van development for the entire group.

Previous: Today in Fleet – Monday 22 October
Next: Big-data real-time tools on the cards from Cap HPI