How secure is your car? Thieves able to drive latest cars away in seconds

Some of Britain’s newest and most popular cars are at risk of being stolen in a matter of seconds, a new report by What Car? has found. 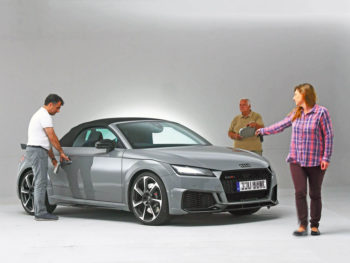 The Audi TT RS could be stolen in 10 seconds, but only if its key had not deactivated its signal

Thieves are able to exploit weaknesses in keyless entry and start systems, including the DS 3 Crossback Ultra Prestige able to be unlocked and started in just 10 seconds (5 seconds to enter plus 5 seconds to start the engine). The Audi TT RS could also be stolen in 10 seconds – although only when its optional keyless entry system was active and its motion sensor technology had not disabled the keyfob. The recently replaced Land Rover Discovery Sport could also be stolen in 30 seconds. What Car? tested seven different models each with keyless entry systems.

Car theft rates in England and Wales have reached an eight-year high, with more than 106,000 stolen last year alone. Vehicles fitted with keyless entry and start systems are being targeted by thieves, What Car? said. Criminals using specialist equipment can capture a key’s signal and relay it to another device next to the car, allowing them to enter and in most cases start the vehicle. This has been an on-going problem ever since the technology was first conceived, as the wireless signal the car uses to recognise a key can be enhanced and extended, enabling someone remote from the car to open its doors and start the engine, having fooled the car into thinking its key is in or next to it.

However, some of the latest car models feature technology that helps prevents keyless theft. Manufacturers including Audi, BMW, Ford and Mercedes-Benz, have introduced motion detection technology inside their car keys, which disables the wireless signal after a period of time. The problem is if the key is in a pocket or bag, and the owner is walking around, the car can still be vulnerable as the wireless signal has not [yet] been disabled.

Jaguar Land Rover has taken a different approach, introducing ultra-wide-band radio technology on some of its latest models, which transmits a wide range of signals from the key, in the hope that thieves will be unable to lock onto the signal to fool the vehicle.

Thankfully, What Car?’s security experts were unable to steal any of the vehicles tested once their keyfobs had been deactivated.

What Car?’s findings also neglected to mention low-tech solutions to alleviating the problem, such as storing car keys in metal tins, which act as a Faraday cage and block any emitted signal.

Steve Huntingford, editor of What Car?, said: “It is outrageous that some car makers have introduced keyless entry and start systems without making them anywhere near as secure as the traditional alternatives they’ve replaced.

“It is great news that a number of brands are taking the problem of car theft seriously, but more needs to be done to improve security, particularly of desirable used models.”

Mike Hawes, SMMT chief executive, said, “Vehicle manufacturers are continually investing and developing new security features – including motion sensing key fobs and other technologies – to try and stay one step ahead of criminals, which is an ongoing and extremely costly battle.

“There is no ‘one size fits all’ solution and brands will have their own individual strategies to combat vehicle theft with lead-times to engineer, test and source new countermeasures varying across the industry. Ultimately, however, technology can only do so much and this is why industry continues to call for action to prevent the open sale of devices used by criminals to steal cars.”