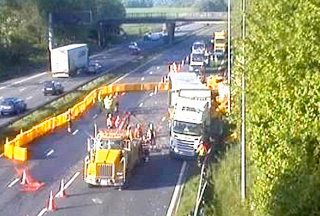 From animal blood to argon, toilet roll to toxic waste, wine to washing up liquid – highways teams have faced many mammoth challenges to clear up after motorway incidents.

To help drivers understand the challenges of safely clearing up after an incident, Highways England has compiled a list of the strangest spills on England’s motorways:

But Highways England sasid that everyday items actually pose the biggest challenges for its clean-up teams. Diesel, which is often spilled after an HGV incident, creates a chemical reaction with asphalt that causes the road surface to rot. Teams have to use highly-specialised hydroblasters to completely clean the road. If any diesel is left over it could create potholes so it’s important that any cleaning is very thorough. If the road is badly damaged, it may have to be totally relaid so the surface maintains its integrity.

Milk poses a similar problem: it rots the road, can stick to the surface and becomes very slippery in wet weather. All traces have to be cleaned off the road before it is safe to reopen. It also poses problems for wildlife.

Melanie Clarke, director of customer operations at Highways England, explained: “We know drivers get frustrated when their journeys are disrupted but we do all we can to clean the road quickly after an incident – and it’s often much more complicated than simply moving the vehicles off the road to reopen it. That’s why it can often take longer for us to safely reopen roads when a potentially dangerous substance is spilled in an incident.

“Our teams expect the unexpected, but of course, when you’re dealing with ten tonnes of salmon, dangerous toxic chemicals, or emulsion paint, the clean-up operation is somewhat complicated.”