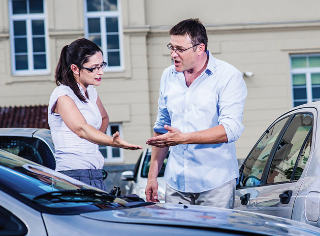 Analysis of Lex Autolease’s accident management fleet of 173,600 vehicles shows that the bill for excess insurance payments because of accidents involving company drivers came in at only slightly less than the previous year – when the figure topped £26m. That’s despite a 5% fall in the number of accidents involving company cars overall, down from 44,448 in 2013 to 42,097 last year.

There was a notable improvement in company car driver behaviour, demonstrated by the reduced number of accidents in which company car drivers were at fault – just over a third of all accidents (34%) during 2014. This is a significant reduction of 15% on the previous year, when figures showed company drivers were responsible for nearly half (49%) of the overall total.

However, the figures also reveal a lack of care from some company drivers as over 7,000 accidents involved hitting an immobile object, such as colliding with a fence whilst manoeuvring. This is almost a fifth (17%) of the total, and significantly up from 10% in 2013. The cost to businesses of such collisions was £5.4 million – almost a quarter of the total bill for accidents overall.

Whilst driver safety levels appear to have improved amongst company drivers, the same cannot be said for other motorists. There was a marked increase between 2013 and 2014 in the proportion of accidents between company car drivers and third parties where the third party was to blame.

More than half of all accidents (52%) involving company cars were due to damage from third parties. Notably, more than 3,000 company cars had a third party crash into the back of them, and almost 4,700 vehicles were hit by a third party whilst parked. This was up from 47% in the previous year.

Richard Harper, head of accident services at Lex Autolease, said: “There is much for businesses and drivers to take heart from in these latest figures. It is reassuring to see that the number of accidents overall has dropped, especially when the accident management fleet as a whole has grown. The decrease in accidents where company car drivers are at fault, too, shows that businesses are making significant progress when it comes to educating employees about road safety.

“However, we have seen only a negligible reduction in the cost of accidents year on year, and it is alarming that £5.4 million was paid for avoidable collisions with stationary objects. When additional costs such as repairs, replacement vehicles, third party damage and personal injury liabilities are factored in, the final accident bill is likely to be considerably higher.

“It is crucial that companies put in place procedures to understand why these sorts of accidents occur and how they can take steps to avoid them.”