Hyundai premium brand offshoot Genesis has revealed its first model designed for Europe in the form of the G70 Shooting Brake. 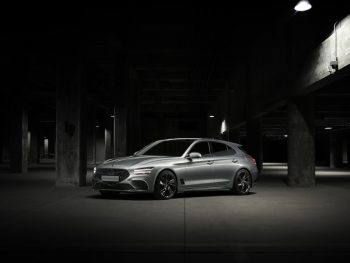 The new brand, which arrives in Europe this summer starting with Germany, the UK and Switzerland, said the estate version of its G70 saloon revealed last year has been designed with European customers in mind and shows its “clear dedication” to the region.

It’s one of a number of models being dedicated solely to European buyers – while Genesis has said it will introduce its existing G80 saloon and GV80 SUV models and the G70 and GV70 models, it’s promised to underline its commitment to Europe with bespoke product.

Three Genesis electric cars are also due before 2023; the first of these will be the Electrified G80 saloon, debuted at the Shanghai Motor Show and the brand’s first-ever electric vehicle. It has an NEDC range of around 311 miles (500km) and a 0-60mph time of 4.9 seconds, while a 350kW rapid charging system gives a 10-80% recharge in 22 minutes.

The G70 Shooting Brake will likely launch before the end of 2021 as the fifth model in Europe. The same size as the saloon, it brings increased practicality; luggage space is up by 40% and the rear seats fold in a 40/20/40 format. Design has also been evolved.

Dominique Boesch, managing director of Genesis Motor Europe, said: “We are delighted to reveal this bespoke product – tailored for our European customers – also soon after revealing news of our arrival into the region.

“The G70 Shooting Brake marries luxury and European automotive heritage with our design philosophy of Athletic Elegance. Our fifth car in Europe, the Shooting Brake will stand apart through its unique design; it is a clear statement of our commitment to the region.”

Orders for the G80 and the GV80 SUV will open in the summer, with the G70 saloon and the GV70 urban SUV following soon after. The G70 Shooting Brake is expected to go on sale after that.