Funding for connected and autonomous vehicles to include public testing

Business Secretary Greg Clark has announced plans for the first phase of £100m investment in connected and autonomous vehicle (CAV) testing infrastructure, which will be used to support projects including public test facilities. 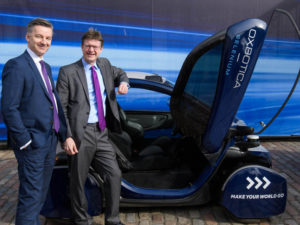 Revealed alongside new research into the benefits of CAVs at the Society of Motor Manufacturers and Traders’ (SMMT) Connected conference, the investment will be matched by industry over the next four years and is intended to create a “cluster of excellence” in CAV testing along the M40 corridor between Birmingham and London.

The programme forms part of the Government’s Industrial Strategy commitment in the 2016 Autumn Statement to develop a world-class CAV testing infrastructure and is being launched as a grant through a series of funding competitions.

The first competition will allow bids for an initial share of £55m of the test bed funding and will support projects including public test facilities in a complex, real-world urban or city environment as well as a controlled test environment representative of driving in a city and a realistic and controlled high-speed, test environment.

Greg Clark said: “By 2035 the global market for connected and autonomous vehicle technologies is predicted to be worth £63bn. Our investment and collaboration with industry to build on our strengths and create a cluster of excellence that will ensure we are at the forefront of its development and perfectly positioned to lead and capitalise on this market.”

Mike Hawes, CEO of the SMMT, added: “We want the UK to be the destination of choice for the development and testing of this new generation of vehicles. Government support and investment, such as we are seeing today, will help this technology flourish allowing the UK to reap the economic and societal benefits.”

The announcement at the SMMT conference comes as the association reveals research showing that CAVs will transform the lives of six out of every 10 people in the UK.

In particular the study on Connected and Autonomous Vehicles: Revolutionising Mobility in Society identifies benefits for those with limited mobility and young people. According to the analysis, 71% of those aged 17 to 24 believe their lives would be improved by the technology. And almost half (49%) of people with mobility-related disabilities say a CAV would allow them to pursue hobbies outside of home or go out to restaurants more often (46%).

Amongst all drivers, automatic braking and parking and the car’s ability to self-diagnose faults were cited as features most likely to reduce stress – the biggest attraction of owning a CAV.