A new government-backed campaign has launched to tackle the issue of mental health among those who drive for work. 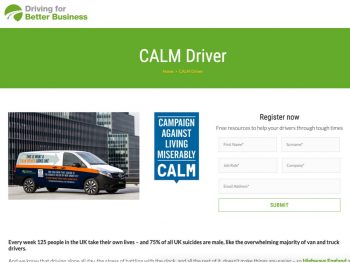 Men’s mental health is a significant issue: 75% of all UK suicides are male and suicide is the biggest killer of men under 45. But it’s a particularly prominent issue among men who drive for work. Figures from the ONS show that the suicide rate for van drivers is 25% higher than the national average and 20% higher for truck drivers.

To make drivers aware of vital support services, a new CALM Driver campaign has launched today. Offering a helpline and webchat among other resources, the campaign is a collaboration between Driving for Better Business – the government-backed Highways England road safety programme – and the Campaign Against Living Miserably (CALM), and is already being backed by major fleets, including Yodel, JM Hall Couriers, Murphy Group, Bott and the Road Haulage Association (RHA).

It’s also being backed by some well-known faces. Award-winning comedian and mental health advocate John Ryan has written and produced a short video on ‘Man v Van’, using humour to impress on drivers the importance of checking their own mental health daily. The video can be watched here.

Fleets can also play their role to promote the campaign by letting drivers know of the videos but also by distributing free driver information packs, which they can place in their vehicles.

The packs (available from Driving for Better Business here) contain a flyer and stickers to go inside commercial vehicles, making drivers aware of CALM’s free and confidential helpline and webchat for anyone who needs to talk about the issues they are facing.

Commenting on the campaign, Simon Turner, campaign manager, Driving for Better Business said: “With a surge in online retail, there have been increased pressures on drivers to fulfil these extra orders, making their journeys longer and with even more time alone. These working conditions can increase the likelihood of mental health struggles and suicide. Supporting drivers’ mental health, especially during the Covid-19 pandemic, isn’t just morally the right thing to do, it also makes good business sense, helping to keep operations running smoothly, and drivers safe and healthy.”

Joe Marler added: “I’ve struggled with my own mental health for the last few years, and it got particularly dark in the last 18 months. That is why I wanted to get involved in this project, to help others who feel the same as me, and try and help them understand that it’s ok to struggle, and that they are not alone with these feelings. I’m much better than what I was. When I opened-up to my wife about my struggles it made me feel so much better to get it off my chest and share the issues I was having. The more I’ve spoken openly with my friends and family about my issues the stronger I’ve felt. It’s strong to be open and honest about how you feel, it’s not a weakness in the slightest. The weakness is not being there for your loved ones and vice versa.”

Previous: Richard Schooling to depart from Alphabet International
Next: Addison Lee supports SMEs with ‘Give a Lift’ competition