Average CO2 figures for new leased cars showed a sharp fall in Q3 2019, despite a rise in the overall average CO2 emissions across the new car sector. 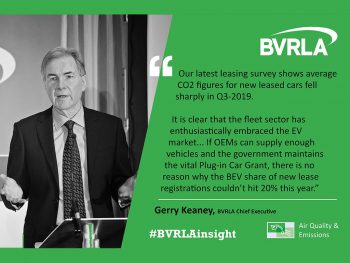 While diesel’s market share has continued to fall, dropping to 38.3% of new registrations, BVRLA analysis shows that petrol’s share has also fallen back very slightly

The BVRLA’s Q3 2019 Quarterly Leasing Survey has average CO2 for all new leased cars at 116.8g/km, down from 118.5g/km in the previous quarter. The fall has been caused by a dramatic rise in new BEV registrations, which are now responsible for 1.6% of all new lease cars. This has offset the upward CO2 pressure caused by the increasing market share of petrol and personal lease vehicles and the inflationary impact of the new WLTP emissions standard.

While diesel’s market share has continued to fall, dropping to 38.3% of new registrations, BVRLA analysis shows that petrol’s share has also fallen back very slightly – to 52.8% – in the face of the BEV surge.

The decrease in average new lease car CO2 is all the more interesting as SMMT data for 2019 across all new cars shows the average figure rose by +2.7% to 127.9g/km. While it’s the third year that new car average CO2 has risen, this was said to be primarily due to the September 2018 introduction of the more stringent WLTP test, as well as the shift to SUVs and the decline in diesel that were responsible for the rises in previous years.

Commenting on the fall in average CO2 figures for new lease cars, BVRLA chief executive Gerry Keaney: “It is clear that the fleet sector has enthusiastically embraced the EV market and we expect to see BEV registrations really take-off in 2020.

“If OEMs can supply enough vehicles and the government maintains the vital Plug-in Car Grant, there is no reason why the BEV share of new lease registrations couldn’t hit 20% by the end of the year.”

Elsewhere, the survey provides more evidence of the squeeze on the traditional business fleet leasing market (finance lease and contract hire). The total market shrank to a four-year low of 1.21 million vehicles, with the car portion falling 9% year-on-year and van fleet growth receding to 2.8% compared to the same period in 2018. This decline was partially offset by continued growth in the personal contract hire market, which rose 17% for cars and 2% for vans.