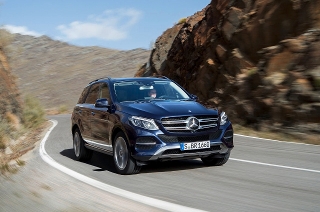 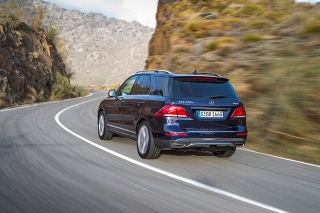 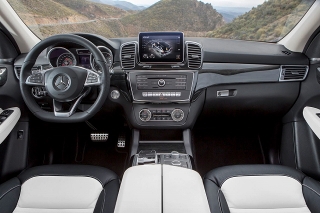 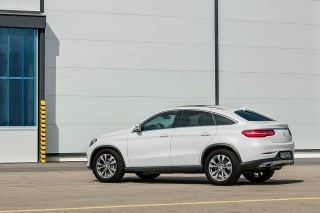 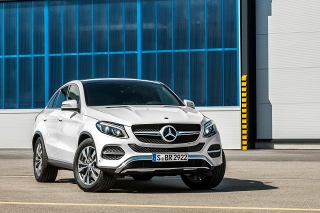 While new niches seem to be de rigeur for the German premium brands at the moment, the GLE-Class isn’t really a newcomer. A new badge for what’s essentially a refreshed ML-Class, the biggest changes here come from a second bodystyle and the addition of plug-in hybrid technology.

Now very much a global car, the outgoing ML-Class built on its predecessor’s surprisingly strong fleet share by being the only German premium brand to offer a four-cylinder diesel engine in this class in the UK. With associated advantages in terms of cost, fuel efficiency and that all-important CO2 figure, its UK sales dominance isn’t expected to waver.

The biggest upgrade for the GLE 250 d is the transmission, which now has nine gears instead of seven and thus travels a few more miles on a gallon of diesel. For an entry-level engine, power delivery is smooth and it feels relaxed rather than underpowered, though it can sound coarse under load. The only thing that gives the price point away is the lack of air suspension on Sport and AMG Line trims. The steel-sprung alternative is uncharacteristically firm.

It’s the more versatile of the SUV’s two economy-focused drivetrains, despite the plug-in hybrid GLE 500 e claiming the headline CO2 figures. Powered by a V6 petrol engine and electric motor and capable of forward-planning the most efficient way to use them based on its satellite navigation, it’s certainly clever. It also offers electric four-wheel drive at up to 70mph and a combined 436bhp, which makes this the fastest non-AMG model in the range.

But it’s a car with compromises. A relatively short 18-mile range, replenished in two hours, means drivers covering long distances will spend most of their journey pulling 2.5 tonnes with a large – albeit electrically-assisted – petrol engine. The battery also raises the boot floor by around five inches, resulting in load volume comparable to a GLA-Class and a knock to the practicality which is such a big part of this segment’s appeal.

There’s no four-cylinder diesel or hybrid in the Coupe. Aimed squarely at the BMW X6 – and yes there’s also a rival in the pipeline for the X4 – it shares only the V6 turbodiesel and AMG-tuned 578bhp biturbo V8 with its sibling. It’ll be as visually challenging to some as it is irresistibly alluring to others, but it’s an important model for incremental sales growth.

Despite the Coupe’s sloping roofline, it’s light rather than headroom which is the big sacrifice in the back, and the raised lip under the tailgate is awkward to lift luggage over. But it’s a pleasure to drive. The V6 diesel produces 258hp and – in both cars – offers the right muscular soundtrack and a pleasing surge of torque, which with its nine-speed gearbox means it’s barely idling at motorway speeds and should return respectable real-world economy.

The GLE-Class might signal the end of this segment’s oldest nameplate, but for the majority of fleet customers it’s business as usual. A softer-edged update of a car which, in a part of the market full of niches, caters for its core customers very effectively.

Luxurious and accessible in 250 d form, this stacks up well for upper-echelon company car drivers. But consider using that price advantage to add air suspension.