Ford has revealed its facelifted Ka+ range, which debuts a new Ka+ Active softroader version as well as the Sync 3 infotainment system and the model’s first diesel. 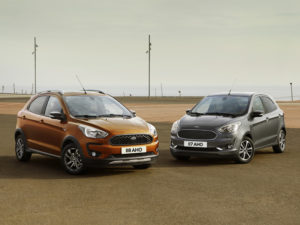 Unveiled nearly a year after Ford announced it was adding an Active model to its Fiesta line-up, the Ka+ Active takes the same formula of raised ride height, body cladding and interior changes and applies it to the Ka+ along with bespoke chassis tuning.

The full Ka line-up, which is priced from £10,795, also introduces revised styling as well as technologies including Ford’s Sync 3 communications and entertainment system, rain-sensing wipers and automatic headlamps. Two trim levels are on offer: Studio and Zetec.

Engine line-up across the range includes a new 1.2-litre Ti-VCT petrol engine with 69 or 84bhp, which replaces the previous 1.2-litre Duratec unit, and the 94bhp 1.5-litre TDCi seen in the Fiesta, which brings anticipated CO2 emissions from 99g/km.