Electric cars step up to the challenge at 2018 MPG Marathon

Results from the 2018 Fleet World/ALD Automotive MPG Marathon have shown fleets and drivers have never a wider choice of technologies at their disposal, just as rising pump prices and the new economy test put fuel prices at the top of the motoring agenda. 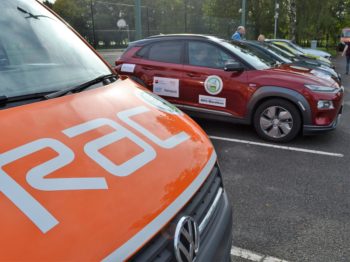 Honda’s ultra-efficient 1.6-litre diesel has taken multiple class and overall wins since it was first entered in 2013, both in the Civic and CR-V SUV. The carmaker’s long-term pursuit of efficiency was also backed up by a 2001 Insight hybrid, driven by Fleet World editor Alex Grant and publisher Jerry Ramsdale. Although not eligible for an overall win, it came in a close second for best overall economy with a better-than-brochure figure of 84.8mpg over 360 miles.

The event also included notable performances from two electric cars, showing how fast the technology is improving. Fleet World content editor, Jonathan Musk, put training from sponsor IAM Roadsmart to the test, with the  Hyundai Kona Electric averaging 5.7 miles per kilowatt-hour of electricity – or enough to cover its entire 337-mile route on an 89% charge. Leasing company ALD Automotive, meanwhile, continued to build on its ultra-low emission expertise, with Chris Britton and Martha Sloper achieving 5.8 miles per kilowatt-hour in a Volkswagen e-Golf, equating to a range of around 200 miles from its 35.8kWh battery.

Both electric cars were able to follow the same route and timings as other entrants, and at a significantly lower cost. Based on average UK energy prices, the e-Golf used £8.12 of electricity and the Kona used £8.44 during the event – which is around a third of the fuel costs of the most efficient diesel vehicles.

The MPG Marathon is a two-day economy driving event, this year returning to the Forest of Arden resort near Solihull and with routes extending as far as the Peak District and Gloucestershire. Entrants are tasked with finding the most efficient way to get between set waypoints, testing their ability to achieve the best possible fuel economy under real-world conditions.

Speed and driving behaviour was monitored in real-time using Airmax Remote telematics, with precise fuel use checked by RAC Business at the start and end of the drive. This year’s results arrive just weeks before the economy figures derived from the tougher new Worldwide harmonised Light Vehicles Test Procedure (WLTP) test are released – all vehicles* entered in the event have been tested under the new regime.

Luke Wikner of Fleet World Group, which organises the event, said: “Since the first MPG Marathon took place amid fuel protests in 2000, the event repeatedly proved that small changes to driving style can make a significant difference to the on-road economy – whether that’s petrol, diesel or electric.”