Swedish e-scooter operator Voi will triple its UK fleet of rental e-scooters on trial and double its operational area. 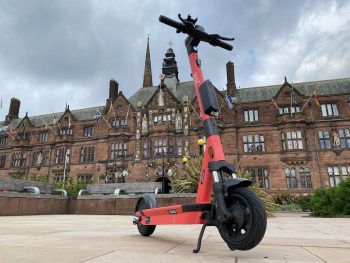 Voi has been operating in the UK for three months and will this weekend hit the milestone of 250,000 rides across its active trials

Birmingham, Liverpool, Bristol, Bath, Northampton and Cambridge will all see a gradual increase in e-scooters during December, in response to reported strong demand from the public.

Voi has been operating in the UK for just three months and will this weekend hit the milestone of 250,000 rides across its active trials. It says that over the course of the 12-month trials started, it anticipates that 513-1795 tonnes CO2e will be saved by introducing e-scooters in the six cities already operating, based on the e-scooters replacing cars.

It also recently revealed that it will soon operate in North Devon, the company’s first UK trial in a rural area, working with North Devon Council, the Devon and Cornwall Police and Devon’s leading FE college, Petroc, to tackle transport challenges in the district for students, citizens and tourists.

Other UK trials are expected to be announced in the coming weeks.

Richard Corbett, regional general manager of UK, Ireland and Benelux for Voi, said: “Trials were established to see how e-scooters could help cities get people travelling around. We are seeing that in the cities where they are offered, e-scooters are fast becoming essential to many people. As every Voi ride is carbon-neutral, e-scooters contribute to making cities healthier and more enjoyable places to live.

“We are very proud that Voi has helped support local communities and economies across the UK during what has been a challenging time. Voi is passionate about contributing positively to every town and city, and we will continue to work closely with local authorities to ensure shared e-scooters can support the existing local transport networks while contributing to reaching their carbon-emission reduction targets.”

In early 2021, Voi will launch its first e-scooter trial in a rural district, in Barnstaple, North Devon. During the trial Voi will work with North Devon Council, the Devon and Cornwall Police and Devon’s leading FE college, Petroc, to tackle transport challenges in the district for students, citizens and tourists. Other UK trials are also expected.

*This estimate is based on a forecasted fleet size in each city, average utilisation rates, a 12-16% car replacement rate based on user surveys done in comparable Voi cities, and average CO2 factors for cars and carbon-neutral rides for Voi. Carbon neutral since 2020, Voi is working with a climate expert to verify its carbon reduction estimates.