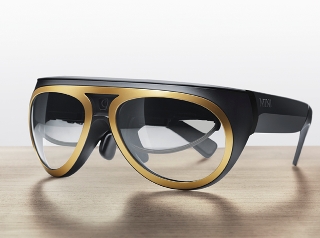 Billed as an alternative to a fixed head-up display, MINI has developed a prototype augmented reality display built into a headset which looks a little like a pair of aviation goggles. The aim is to increase the amount of information presented to a driver, without requiring them to look away from the road ahead.

MINI isn’t the first carmaker to hint at augmented reality becoming part of its future vehicles, but its approach is unique. Most so far have used flexible displays housed within the vehicle’s glass, or on interior panels, to provide extra data. The MINI Augmented Vision concept is worn by the driver, which means it can provide additional data wherever that person looks – it’s almost unlimited.

The headset itself is a collaborative project, with partners including technology giant Qualcomm. A pair of cameras and accelerometers enable the headset to work out what it’s looking at, while sensors within the car can pinpoint its exact location. It means information is shown where it’s needed and won’t obscure other road users if the driver isn’t looking straight ahead.

What can it do?

The headset contains two Liquid Crystal on Silicon displays, one for each eye. Typically transparent, these can display high resolution three-dimensional images, overlayed over the car’s surroundings. Connected to the car, this would enable navigation instructions to be projected into the driver’s line of sight, as well as icons giving information about points of interest, speed limits and car parks.

With a high resolution display, the technology can offer far more than just basic information though. Cameras on the exterior of the vehicle could transmit live images back to the displays, essentially making parts of the car ‘transparent’ during tight manoeuvres. This would avoid blind spots from A and B pillars at junctions, or give a clear view of the kerb while parking, for example.

Smartphone integration is a big focus at BMW Group, and it’s part of this prototype too. Connected to the driver’s phone, the displays could offer last mile navigation when leaving the car, or direct them back to their parking space when they return. It could also offer text alerts while driving, with the option to have incoming messages read aloud.

There’s no timeframe yet, but MINI says it is looking to develop this technology for production. Among the pre-launch updates, there’s scope for the headset to be able to track the wearer’s eye movements as well as their head, offering further accuracy.

With the pace of development in connected cars accelerating, distracted driving is becoming a key concern for manufacturers. Whether fixed to the car or worn by the driver, augmented reality displays offer a targeted, functional overlay with no need to look away from the road. Expect this to become a vital part of the next generation of vehicles.