Suzuki has dropped diesel engines from its UK line-up, following a year where more than 97% of its sales were petrol-powered. 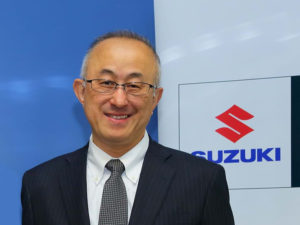 Nobuo Suyama, managing director of Suzuki GB, told Fleet World the company had sold 87 diesel cars last year, commenting: “We only have a few units stock left at the dealers, but fiscally diesel is already finished”.

That’s despite a record year in 2017; at 40,343 units, Suzuki was up 6% on 2016, while a renewed focus on fleet under Graeme Jenkins, appointed at the start of the year, had almost quadrupled its volume in that channel to around 9,000 cars.

Suyama said discontinuing diesel – which had only been available in the S-Cross and Vitara compact SUVs – would not be likely to affect Suzuki’s recent fleet sales success and growth, stating: “Most of our model range is smaller sized and not diesel segments.”

Suzuki has put its effort into efficient petrol engines and a growing mild hybrid line-up, and has further plans to electrify its range over the next few years. The company said last year that attitudes had changed, and fleets were no longer resistant to diesel alternatives.

FIND OUT MORE: To discover how Suzuki’s efficient petrol and mild hybrid drivetrains can benefit your fleet, visit The Fleet Show at Silverstone on 9 May. Click here to register for free.