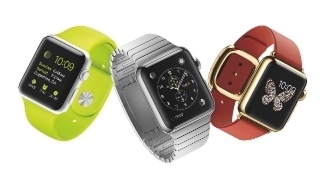 The move follows this week’s launch of the Apple Watch with Croydon-based SmartWitness, which manufactures in-car CCTV and safety cameras, saying it is concerned that driver distraction will be significantly increased by drivers using the new smart watch.

Recent research has shown that using a smart watch whilst driving makes response times nearly three times longer – and is even worse than using a hand-held mobile phone.

Despite this fact the Department for Transport currently have no ban in place to for the new wearable technology. Use of mobile phones whilst driving was banned in 2003 but there is currently no such legislation in place for smart watches like the Apple Watch.

SmartWitness head of international sales Mark Berry said: “Apple’s launch of the Apple Watch this week is going to bring wearable smart watches into the mainstream and the effect on increased driver distraction could be disastrous.

“There is currently no legislation to ban the use of smart watches whilst driving despite the fact that tests have shown that they cause even more driver distraction than mobile phones.

“So far the Department for Transport has only warned drivers about the dangers of using smart watches but now with the numbers of owners about to significantly rise this issue needs to be dealt with immediately.”

Recent research by the Transport Research Laboratory (TRL) in Wokingham, Berks showed that a driver reading a message on an iWatch would take 2.52 seconds to react to an emergency manoeuvre, whereas a driver talking to another passenger would react in 0.9 seconds. Reading on an iWatch was even found to be more distracting than using a handheld mobile (1.85 second delay).

SmartWitness’ Mark Berry added: “At a speed of 50mph, reading a message on an Apple Watch would add 36.6 feet to the average stopping distance for a car. This could be the difference between life and death especially if there was a potential collision with a pedestrian or a cyclist.”

And he added: “We need to have a Driver Mode added to the smart watches, much in the same way there’s an Airplane Mode button which switches off messaging and calls during flights – and we need legislation to enforce it otherwise there could be a significant increase in serious road accidents and even fatalities caused by smart watches.”