Vauxhall has confirmed that it is to cut around 400 jobs at its Ellemere Port plant in the UK in line with falling demand for the Astra. 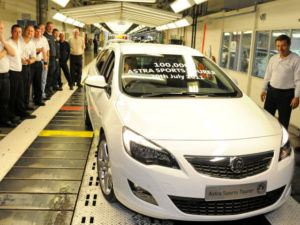 The jobs will be axed by the end of the year under a voluntary redundancy programme as the carmaker looks to switch to a single shift in 2018 “to improve its performance and protect its future as the industry faces challenging European market conditions and a declining passenger car market”.

The carmaker, which was acquired by PSA Group earlier this year, said the downturn in Astra demand comes as consumers increasingly switch to SUVs.

Speaking to Fleet World, a company spokesperson said that the cutbacks would not impact on lead times for new vehicles, adding: “We will build whatever anyone wants us to build and we will build them quickly and to schedule.”

In a statement, PSA Group said: “The company has every confidence in the capability and skills of the Ellesmere Port workforce to deliver the necessary improvements in financial performance.

“Once it has enough visibility on the future trading relationship with the EU, and the plant competitiveness has been addressed, the company will be in a position to consider future investments.”

The Unite union described the Vauxhall announcement as another “huge loss” to the north west economy which would be felt throughout the supply chain, and called for guarantees over future investment into the plant.

Previous: Drivers who kill to get life sentences
Next: LeasePlan to introduce new propositions covering corporates, SMEs and EVs