The Olympics may be over and the Paralympics in full swing, but there’s one more major sporting competition that’s set to catch the nation’s attention before the year is out. 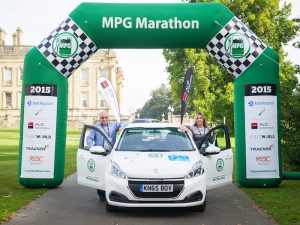 The annual MPG Marathon takes place on 18-19 October and will highlight the benefits of fuel efficient, economical driving, while at the same time providing a shop window into some of the most innovative, eco-friendly and diverse vehicles on sale – and even some not yet on sale – in the UK.

Sponsored by ALD Automotive, RAC Business and Crystal Ball, a provider of fleet management systems, the event will be based at the Heythrop Park Resort in Oxfordshire. Competitors will be tasked with planning their own routes to four different venues across the heart of the country, including a visit to the iconic Silverstone racing circuit in Northamptonshire, home to the British Grand Prix.

“The fact that drivers are judged on how much they can improve a car’s fuel economy over the official figure is massively important for the event,” said event organiser Jerry Ramsdale.

“It means you can enter the event in an outlandish sports car or a huge SUV, yet still show the world the benefits of driving economically, both in terms of environmental impact and cutting fuel costs, which are just as important to private motorists as they are to fleet managers and business drivers.”

Highlight categories of the event for 2016 will include motorcycles and scooters, multi-seat MPVs and electric cars, pick-ups, five separate van categories, hybrids and a special award for the most parsimonious performance car, culminating in an awards ceremony at the prestigious venue.

Brand new for 2016 will be ‘Garage 56’, named after the special place on the grid reserved for experimental vehicles at the famous Le Mans 24 Hour race. The category will be open to any vehicle that doesn’t fit in any of the event’s standard categories, including prototypes, concept cars, classic cars or tow vehicles, each of which will tell a story all of its own.

In another new move for the event, teams are encouraged to enter under the newly launched ‘Britain’s most Frugal Fleet’ category. A minimum of three cars of the same type, engine and trim level can be entered as a group, with MPG across all entries averaged out to give a winning real world figure.

Although the 2016 event is already heavily subscribed, there are a limited number of places still available for vehicle manufacturers, fleet operators, dealer groups or even individuals to take part.

Previous: New Ampera-e won’t make it to UK, confirms Vauxhall
Next: Employees urged to take to two wheels for Cycle to Work Day