Connected Cars: The next steps

By Martyn Collins / 12 months ago / Features, Top Stories / No Comments

What started back in the 1990s with notifications of crashes to emergency responders, locating the vehicle and roadside assistance, has now grown to involve full 4G LTE data connectivity in most models and even self-driving modes. Martyn Collins looks at the next level of connected car development and how IT relates to fleet. 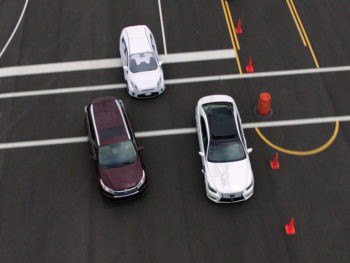 Toyota’s Guardian system works with the driver, but gives all the benefits of an autonomous system

If you thought that the pace of change in the connected car segment was fast, then to quote the band Bachman-Turner Overdrive, “You ain’t seen nothing yet!”

According to TomTom sales director UK and Ireland Beverley Wise, the next developments in vehicle connectivity, both from a consumer motoring and fleet management perspective, must be regarded as key ingredients to what tech specialists have dubbed the evolving ‘third platform’.

Beverly Wise goes on to say: “For business fleets, integrations of vehicle-related data from open telematics platforms with a variety of different software systems and mobile hardware, have led to a seismic shift towards automated, end-to-end, business processes.” But, what are the latest developments? Well, Las Vegas at the start of January was a good place to start.

The start of a new year, and the chance for car manufacturers to demonstrate their latest technology at what is rapidly turning into a must-exhibit show for makers – CES, or the Consumer Electronics Show, Las Vegas.

Previously the show was just about smartphones, TVs and robots, but 2019 developments focused on the next stage of car connectivity, which included the Qualcomm 9150 C-V2X chipset and Toyota’s Chauffeur system.

The Qualcomm 9150 C-V2X chipset is the latest in a long-running relationship with the Ford Motor Company, and is a development of the advanced connectivity systems for Ford vehicles, However, where it differs is that it includes upcoming Cellular Vehicle-to-Everything (C-V2X) technology. Basically, C-V2X is a highly advanced wireless connectivity technology, allowing vehicles to directly communicate with other vehicles, pedestrian devices, and roadside infrastructure, such as traffic signs and construction zones — without the involvement of a cellular network. These other cars, signs and traffic zones then work in an end-to-end process to provide the car with information about its surroundings and identify objects that may be out of view — including accidents that are further down the road, or pedestrians that may be obstructed by large trucks or buildings. The biggest bonus for fleet with this latest C-V2X technology is that it will cut travel time to a minimum and, with the system being aware what obstacles are around it, increase safety in the process.

More importantly, because the Qualcomm 9150 C-V2X is supported by some of the latest advancements in wireless technology, it provides a strong path towards 5G. This means a C-V2X-enabled vehicle won’t go out-of-date and instead is designed to remain compatible with future devices, services and infrastructure that will come with 5G technology.

Toyota’s latest connected technology was also showcased at CES 2019. Toyota is unusual when compared to other car manufacturers, as it is developing not one but two technologies when working on next-level connected cars. The first being Chauffeur, which takes control of the driving, and its Guardian tech, which still involves drivers most of the time and was explained at CES 2019.

Guardian is designed to mimic the way a human interfaces with a fighter jet — as in many instances the pilot doesn’t directly fly the plane. Instead, the pilot’s control inputs are read by a flight control system that makes corrections to ensure safety, and that’s the idea behind Guardian.

However, Toyota freely admits this type of functionality is much more difficult to achieve in a car, which needs to constantly perceive and react to what’s around it — like pedestrians and other vehicles. Interestingly, there’s no switch between human and autonomous driving, instead with Guardian they work as a team, giving all the safety benefits of autonomous driving, without drivers losing the use of the steering wheel.

Toyota is planning to roll out this system in the e-Palette, a modular electric vehicle designed for ride sharing and delivery services — essentially a box on wheels.

Another growth area in car connectivity seen at CES 2019 is in Virtual Personal Assistants (VPA). If predictions are correct, we will see close to a billion of these software platforms enabled in cars by 2024.

They promise a connected, safer driving experience in cars, using an on-board telematics unit which can control selected functions within the car and externally, via communication with a smart home device.

In cars, this should mean they will work while driving and be able to answer any question regarding the vehicle, plus if the worst should happen, provide help and support during emergencies, by calling the emergency services and identifying where the accident has taken place. Of more interest to the fleet industry, Virtual Personal Assistants should be able to reduce downtime needed for services

and maintenance by troubleshooting problems and scheduling servicing when needed. Also helpful considering today’s business needs, the Virtual Personal Assistant in the car would be aware of the driver’s business schedule and as such, it would be able to help with finding the quickest route to a meeting, making the driver aware of any obstacles on this route such as traffic, and even find parking, or should it be necessary locate a petrol station.

With Amazon Alexa already fitted to SEAT models, this sort of connectivity is set to explode into other models. Nissan and BMW are opting to work with Microsoft’s Cortana system in selected models in the near future, and Ford is choosing instead to go with the already used Amazon Alexa system for selected models. Finally, Hyundai and Mercedes are opting to make their models partly voice operable via Google Assistant. Apple’s Siri assistant is already fitted alongside their CarPlay software in many brands such as BMW, Nissan, Hyundai and Ford.

Virtual Personal Assistant integration with your smartphone is expected to be most prominent moving forward. They work via your smartphone’s microphones, which can control apps but not in-vehicle features. However, if you have a car with Virtual System connectivity, predictions are that you’ll be able to close items such as the garage and play things such as audiobook — going from right where you left it in your house!

However, of more relevance to fleet drivers, this connectivity should also mean you can start the car, adjust the air conditioning and set travel destination details via your voice alone.

Closer to home and available now is one of the more recent connected innovations and winner at our recent Great British Fleet Awards – the Trakm8 RH600 4G camera. Launched in April 2018, following two successful pilots, the RH600 scores over other telematics cameras, as it combines all of the features you’d expect from modern telematics such as ‘track n trace’ driver behaviour analytics, and vehicle health alerts — which can also

be integrated with Trakm8’s fleet optimisation solution — with the additional benefits of a dash cam.

On top of this, the RH600 further innovates by taking driver scoring and reducing road risk to new levels, thanks to its dual camera head — one lens faces the road ahead, like a standard dash cam, while the other faces into the vehicle, in order to monitor the driver. As thus, it opens up new possibilities, for fleet management including remote live-streaming, where fleet managers could conduct spot checks on drivers. Advanced Driver Assistance Systems (ADAS) features, which features and monitors for for distracted driving and even driver drowsiness. Finally, those ADAS features will enable much more accurate and sophisticated scoring of drivers.

The next developments in vehicle connectivity, both from a consumer and fleet management perspective must be regarded as key ingredients to what tech specialists have called the evolving third platform.