Order books for Citroën’s C5 Aircross flagship SUV are to open next month with prices starting from £23,225 while CO2 starts from 106g/km. 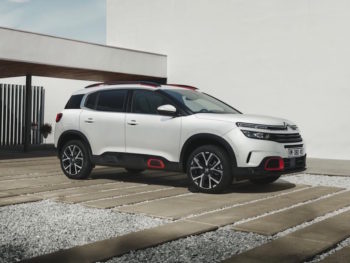 The new five-seat SUV, which will bring the fight to models such as the Nissan Qashqai and Seat Ateca, is based on PSA’s EMP2 platform used across group SUV models from the Vauxhall Grandland X to the Peugeot 3008/5008, and features three individual, sliding, folding and reclining rear seats, and claimed best-in-class boot volume ranging from 580-litres to 720-litres, and up to 1,630-litres with the second-row seats folded down.

The C5 Aircross will be offered in three trim levels – Feel, Flair and Flair Plus. Standard features include a 12.3-inch digital instrument cluster and eight-inch HD touchscreen along with the brand’s new suspension system with Progressive Hydraulic Cushions while Flair and Flair Plus get Advanced Comfort seats, Citroën Connect Nav with TomTom Live updates and ConnectedCAM Citroën.

A range of PureTech petrol and BlueHDi diesel engines will be offered from launch while the C5 Aircross will become the first Citroën available with plug-in hybrid (PHEV) technology in early 2020, with a range of 37 miles (60km) in zero-emission mode.