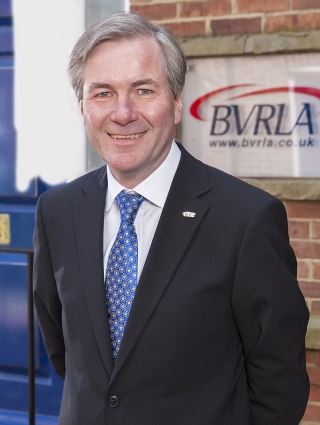 BVRLA chief executive Gerry Keaney said: ‘The industry performed well in 2014, with the association seeing a further increase in membership and fleet sizes across nearly all sectors.

‘Road transport is rising up the government agenda, and the good news is that the fleet industry has never had a more influential voice in Whitehall.

‘2015 will have its challenges and election years are always hard to predict, but we believe that this will be another successful year for the vehicle rental and leasing industry.’

‘The upcoming General Election is widely expected to be even closer than that of 2010, with most political analysts saying it is too close to call. This raises the prospect of another coalition being formed, which is likely to result in an extra period of political and economic uncertainty.

‘Businesses will also be waiting anxiously to see how our next government decides to implement the required austerity packages of tax measures and spending cuts.

‘On a more positive note, the launch of Highways England and a new roads watchdog and passenger champion suggests that road users will have much greater voice within government going forward.’

‘Steady economic growth and a reasonable level of consumer confidence will continue to support the used vehicle market, particularly demand for high-quality ex-rental and leased fleet vehicles. Average prices for used fleet cars saw a slight seasonal dip towards the end of 2014, but the BVRLA does not expect this to be a trend that will continue.

‘There are concerns that the continued growth in new registrations and aggressively-priced retail offers could put pressure on used car demand or create an oversupply for certain used models. This is a factor, but the BVRLA is confident that a greater use of technology and market data within the remarketing process is making it easier for the sector to avoid many of the potential peaks or troughs in used vehicle supply.

‘Meanwhile, the used van market will continue to strengthen, with stock in short supply and demand for panel vans underpinned by growth in the parcel and courier sector.

‘The funding situation remains healthy. As predicted, a number of new funders entered the market in 2014. We expect a similar environment in 2015, with even more new funders entering the vehicle finance sector and rates remaining competitive. This could even lead to some further consolidation as funders look to buy existing lending “books”.

‘BVRLA members enter 2015 with the exciting prospect of some major reductions in their adminsitrative cost base, but these gains cannot be taken for granted. While the abolition of the paper tax disc and introduction of a fleet portal should result in much less paperwork for fleet operators, there must be a smooth transition when the driving licence counterpart is abolished.’

‘It is set to be another challenging year from a regulatory perspective and all the major regulators are likely to flex their muscles to gain a higher profile in the run up to the election. Leasing brokers and funders will have to meet the requirements of the Financial Conduct Authority (FCA) as its new consumer credit regime beds in. We can expect the FCA to continue to use its regulatory powers to further promote transparency, clarity and fairness. We will also see more leasing brokers joining the BVRLA as they realise that membership of a proactive industry association will help them demonstrate that they take this regime seriously.

‘With its limited enforcement budget, the Driver and Vehicle Standards Agency (DVSA) will be taking a more preventative and collaborative approach to road safety, trying to educate operators and working with motoring organisations such as the BVRLA. The van safety campaign the DVSA is launching this year is likely to set the template for much of its future activity.

‘Meanwhile, the BVRLA will continue to lobby regulators and other automotive industry stakeholders at an EU and UK level to provide more clarity on regulation of connected and autonomous vehicles.’

‘Within the leasing sector, the BVRLA expects the strong business confidence from 2014 to continue this year. Most members expect conditions within the wider economy and the fleet leasing sector to improve in 2015, though they remain concerned about profit margins. In the business-to-business environment, we expect to see year-on-year growth of 5% for car leasing, with an-ever increasing market share from the lower medium, dual-purpose and multi-purpose car segments.

‘Growth will be even higher in the van leasing market, which the association expects to maintain the 10% year-on-year increase seen in 2014.

‘We expect to see average CO2 emissions for the lease fleet fall below 120g/km for the first time in 2015 and predict a continued trickle away from diesel to small engine petrol or hybrid cars.

‘The trend towards leasing and rental companies offering ‘mobility services’ will continue, taking advantage of the gradual trend away from paying-to-own towards paying-to-use vehicles. Leasing and rental operators will make increasing use of car club fleet management technology as they start making major inroads into the ‘grey fleet’ market in 2014 as more and more fleets – particularly those in the public sector – come under pressure to tackle the cost and duty of care issues associated with incentivising employees to drive their own cars for work purposes. Meanwhile, car club and car sharing operators will continue to focus on the business market in an attempt to drive up utilisation levels.’

‘The ultra-low emission vehicle (ULEV) market received a much-needed boost in 2014, with the number of plug-in-grant eligible registrations passing the 10,000 barrier as predicted. Despite the recent fall in petrol prices, we expect the number of ULEVs to accelerate again as more new plug-in electric models are launched and customers learn about their practicality and cost-effectiveness for many applications. We predict the extra £200m in funding allocated by the government last year – for up to 50,000 more plug-in car grants – could be exhausted by July 2016.

‘Intelligent mobility and connected vehicles will continue to rise up the agenda of the Government, manufacturers and fleet operators this year. We predict that the Government will announce a major support package for this area of automotive technology in 2015 in a bid to tackle some of the UK’s transport challenges and give our manufacturing sector a competitive advantage.

‘As awareness of the benefits of these new technologies grows, we expect to see more fleets specifying telematics and new safety technologies such as autonomous emergency braking when ordering new vehicles. The BVRLA expects 2015 to be the year its members and other fleet operators will get to grips with vehicle and driver data – establishing what information is available and how it can be used. We think that this area presents a massive opportunity for our members and we are determined to help establish a regulatory and legislative environment that will enable them to realise this potential.’

Previous: “Gas guzzlers” could return to new & used markets due to falling fuel prices
Next: Reality of £1 a litre fuel comes even closer