The BVRLA paid tribute to key figures from its first 50 years and unveiled its new look logo at its Annual Dinner. 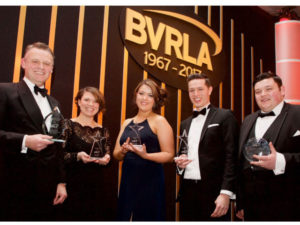 Held on Thursday 2 March in London, the event was attended by over 900 people from the vehicle rental and leasing sector and saw the top performers in BVRLA’s training and accreditation programmes recognised, along with three BVRLA Industry Heroes.

Among the industry achievement awards, Christopher Hume of Arnold Clark Car & Van Rental was awarded the City & Guilds Achievement Award after achieving the highest pass mark last year for the Certificate for Rental Operator Skills, with a score of 98%.

The BVRLA also announced its Industry Hero Awards, including Ashley D’Alanno of Licensed Carriage Hire, who was recognised for his work in launching a range of new services, including a bespoke replacement vehicle service for celebrities and VIPs.

Janine Lemon of LeasePlan UK was awarded for her work in leading the development of a brand-new digital customer services function, along with Jennifer Thomas of ALD Automotive who has been the driving force behind a major rethink in the way ALD deals with vulnerable customers.

During his address, BVRLA chairman Simon Oliphant also paid tribute to some of the former officers of the association, many of whom were in attendance.

“It is people that make the real difference in business. I am the 26th chairman of the BVRLA, and I have benefited from following in the footsteps of the many talented and dedicated officers who have served the association over the years and helped it to evolve.”

Oliphant also unveiled a short video about the work of the BVRLA as well as a refreshed BVRLA logo.