BMW to include satellite navigation as standard across UK range 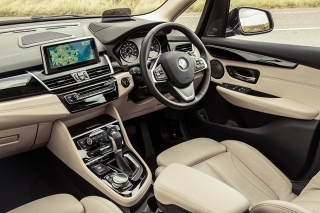 Under the changes, from July onwards, the BMW 2 Series Convertible and 2 Series Active Tourer will receive navigation as a standard feature. In addition to this, the BMW Z4 range will receive BMW Professional Navigation also from July production onwards.

From September onwards, the BMW 1 Series range and 2 Series Coupé will include navigation as standard.

In addition, every model in the company's range will soon come with a 6.5-inch high definition screen, iDrive controller and Traffic Message Channel. Building on this Professional Navigation adds a larger 8.8-inch screen with iDrive Touch controller, Real Time Traffic Information (RTTI) and BMW Online including BMW Remote Services, which allows drivers to send Navigation addresses directly to their vehicle via Google or the BMW My Remote app.

In addition to this news, the cost to upgrade to Professional Navigation for the 1 and 2 Series models has been reduced and now costs £900 for the 1 Series Sports Hatch and 2 Series Coupé and Convertible and £1,395 for the 2 Series Active Tourer and Gran Tourer, with this package also including the BMW Head up Display.

Jeff Knight, forecasting editor cars, CAP, said: "BMW introducing navigation across its entire model range is a first for any mainstream manufacturer in the UK and will inevitably pave the way for others to follow. On-board navigation systems now offer so much more technology than previously seen with the likes of 2D & 3D navigation map displays, traffic information and particularly with BMW standard e-call functionality which is a key safety feature. As well as having standard navigation across the range all BMW models will see an improvement on their residual value from between £300 to £600 (model dependant) so this is good news all round for the customer."