Audi has taken the wraps off the new A5 Sportback five-door coupe and its S5 spec version ahead of the Paris Motor Show. 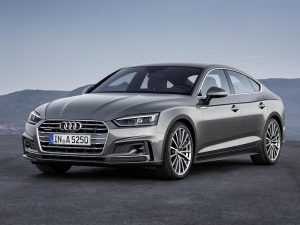 Built on the same MLB platform as used for the two-door A5 coupe, the A5 Sportback wears the same front end and brings a similar interior design, featuring the Audi virtual cockpit, with a 12-inch TFT monitor as well as the optional MMI navigation plus with MMI touch.

Thanks to the use of the new platform, the new model brings more space compared to its predecessor, with an extra 17mm length plus increased shoulder room for the driver and front passenger and rear knee room.

The rear seat back splits 40:20:40 as standard and luggage capacity stands at 480 litres rising to 1,300 litres with the rear seats down.

Engines are carried over from the two-door coupe and cover two TFSI and three TDI engine versions, including an ultra version of the 188bhp 2.0 TDI that offers an official 68.9mpg combined with 108g/km.

Transmissions comprise six-speed manual, seven-speed S tronic dual-clutch or eight-speed tiptronic. Front-wheel drive is standard, with quattro all-wheel drive available as an option in two versions and standard for the 3.0 TDI with 282bhp.

The S5 comes with a 349bhp V6 turbo engine with 369lb.ft of torque, as well as specially tuned S sport suspension and 17-inch forged lightweight wheels, with a wide range of options available up to 19 inches in size.

New technologies include adaptive cruise control (ACC) Stop&Go system including traffic jam assist, which can brake and accelerate in slow-moving traffic up to a driving speed of 40mph and can even temporarily take charge of steering in certain conditions.

Also new is a predictive efficiency assistant, which provides tailored driving advice to help improve fuel consumption, and collision avoidance assist, which intervenes if the car needs to drive around an obstacle to avoid an accident.