Alfa Romeo has announced trim levels and the launch engine line-up for its forthcoming Stelvio SUV. 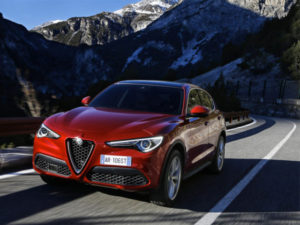 Following the debut at the LA Auto Show of the ‘first edition’ – which has not yet been confirmed for the UK –  and the range-topping Quadrifoglio that arrives later this year, the brand has announced that the UK line-up will bring three trim levels – Stelvio, Stelvio Super and the fleet-orientated Stelvio Tecnica – and a launch engine line-up of a 276bhp 2.0-litre Turbocharged petrol or a 207bhp 2.2-litre diesel engine, both combined with an eight-speed automatic transmission and Q4 all-wheel drive.

The petrol offers a 0-62mph time of 5.7 seconds and a top speed of 143mph while figures for the diesel stand at 6.6 seconds and 133mph respectively.

This compares to rivals such as the BMW X3, which brings emissions from 136/km for its 188bhp 2.0-litre diesel.

The Alfa Romeo Stelvio Super version builds on this with 18-inch alloy wheels, techno-leather and fabric seats in a choice of three colours, three options for the dashboard and door panels and door sills with steel inserts. An additional Luxury Pack and Sports Pack are also available for the Stelvio Super.

UK pricing and specification will be confirmed closer to sale start. First deliveries are expected to start early autumn.