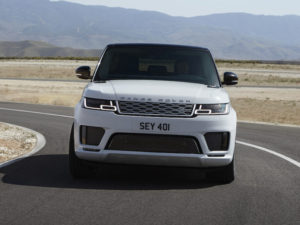 Land Rover says the focus is on both dynamic and sustainable performance – the P400e delivers 0-62mph in 6.7 seconds with a top speed of 137mph while emitting 64g/km and offering 101mpg on the official NEDC combined cycle with an all-electric range of 31 miles.

The default driving mode is as a hybrid and the driver can opt to use a Predictive Energy Optimisation (PEO) function that uses GPS altitude data to switch between electric motor and petrol engine to maximise fuel economy on route to a chosen destination.

The motor is powered by a 13.1kWh lithium-ion battery, which can be charged from two hours 45 minutes on a 7kW/32-amp charger or seven hours 30 minutes using the 10 amp home charging cable supplied as standard. The battery is situated beneath the boot floor, reducing load space by 77 litres to 703.

Other changes to the facelifted Range Rover Sport include increased power for the 567bhp flagship SVR, styling changes and technology updates including a new infotainment system and enhanced in-car connectivity.

The Range Rover Sport is available to order from Land Rover retailers now, priced from £61,315. Prices for the new PHEV model start from £70,800. Deliveries start from early 2018.For more of the latest industry news, click here.