Volkswagen will restart production in Europe on a step-by-step basis from next week while ensuring strict protection for workers. 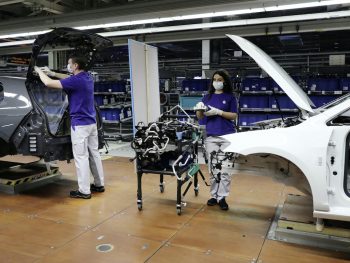 From 20 April, production will restart for the Volkswagen Passenger Cars brand in Zwickau and Bratislava. This will be followed on 27 April by the restart of production at the other Volkswagen brand plants in Germany, Portugal, Spain, Russia, and the USA.

Volkswagen Commercial Vehicles has also said it will gradually resume production from 27 April at its plants in Hannover and in Poland at Poznań and Września following a five-week shutdown.

VW will also resume production in South Africa, Argentina, Brazil and Mexico in May.

Manufacturing will run in line with the current availability of parts, government requirements in Germany and Europe, the development of sales markets and the resulting modes of operation of the plants.

Volkswagen Group Components had already started to resume production step-by-step at its plants in Brunswick and Kassel from 6 April, followed by the components plants in Salzgitter, Chemnitz and Hanover, as well as the Polish plants, from 14 April, to safeguard component supplies for vehicle production in China.

Andreas Tostmann, chief of production and logistics, said: “We are resuming production and logistics with a staged approach in a well-organised way. The health of our employees has the highest priority. We are providing safe workplaces and the maximum possible level of health protection with a 100-point plan. In full awareness of our responsibility, we are ensuring that the economy regains momentum and cars once again leave the plants and reach our dealers and customers.”

Volkswagen added that protection for employees is being backed up by a comprehensive package of measures, featuring a 100-point plan that includes protocols already used in China; 32 of Volkswagen Group China’s 33 plants have now returned to production.

The list of measures includes concrete rules on hygiene and maintaining distances, mandatory shielding of mouth and nose in areas where keeping 1.5 metres apart is not possible, more frequent cleaning, staggering the start and end of shifts in order to avoid contact and encouraging all workers to take their own temperature prior to starting work each day.