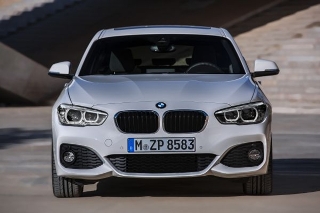 This includes adding the first ever three-cylinder petrol engine in the 1 Series. The new 1.5-litre 118i matches the 134bhp of its 1.6-litre, four-cylinder predecessor, yet offers fuel economy of 56.4mpg with CO2 emissions of 116g/km, compared to 52.3mpg and 125g/km for the old engine. With the eight-speed automatic gearbox, this rises to 58.9mpg with CO2 emissions of 112g/km.

Three-cylinder engine options are also widened for the 2 Series Gran Tourer seven-seat MPV. This includes a 100bhp 216i as the entry-point for the petrol range, while diesel options now start with the 95bhp 214d, which returns 72.4mpg and emits 104g/km CO2.

Elsewhere, four-cylinder engines have been upgraded throughout the range. BMW has upped the power of the 18d diesel to 148bhp, available in the 2 Series Coupe and Convertible, 3 Series Gran Turismo and, for the first time, as an entry-level diesel in the 4 Series GranCoupe.

The 418d GranCoupe offers fuel economy of 68.9mpg with CO2 emissions of 107g/km for the automatic gearbox, or 109g/km for manual versions.

BMW’s ubiquitous 20d diesel engine, which was upgraded to 188bhp last year, joins the 2 Series Gran Tourer range during the summer, while the 3 Series Gran Turismo and 4 Series Coupe will also benefit from the latest version.

There are also efficiency improvements for the 25d diesel. Fitted to the X5 SUV, this produces 228bhp, while fuel economy has improved from 50.4mpg to 53.3mpg in the new model, corresponding to a 10g/km reduction in CO2 emissions from 149g/km to 139g/km for the two-wheel drive X5 sDrive25d.

Production begins this July, with UK pricing to be announced closer to the launch.

Previous: BVRLA calls for fleets to give views on vehicle developments ahead of Technology Congress
Next: Masternaut appoints new CEO